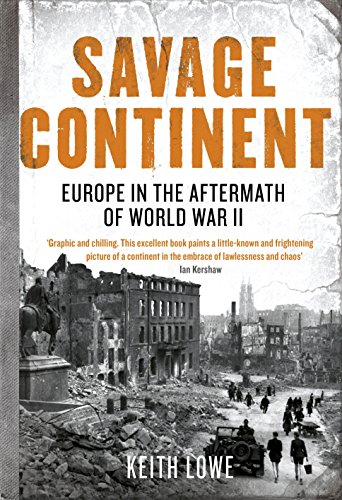 The Second World War might have officially ended in May 1945, but in reality it rumbled on for another 10 years. This book describes a continent still racked by violence, where large sections of the population had yet to accept that the war was over.

Savage Continent: Europe in the Aftermath of World War II by Keith Lowe

The Second World War left Europe in chaos. Landscapes had been ravaged, entire cities razed and more than 35 million people killed. Across most of the continent, the institutions that we now take for granted - such as the police, the media, transport,local and national government - were either entirely absent or hopelessly compromised. Crime rates soared, economies collapsed, and the European population hovered on the brink of starvation.

In this groundbreaking study of the years that followed the war, Keith Lowe describes a continent still racked by violence, where large sections of the population had yet to accept that the war was over. He outlines the warped morality and the insatiable urge for vengeance that were the legacy of the conflict.
Based on original documents, interviews and scholarly literature in eight different languages, Savage Continent is a window on the brief, chaotic period between the end of World War II and the beginning of the Cold War.

'Unbearable but essential. A serious account of things we never knew and our fathers would rather forget. Lowe's transparent prose makes it difficult to look away from a whole catalogue of horrors...you won't sleep afterwards. Such good history it keeps all the questions boiling in your mind', Scotsman

Keith Lowe is widely recognized as an authority on the Second World War, and has often spoken on TV and radio, both in Britain and the United States. He is the author of the critically acclaimed Inferno: The Devastation of Hamburg, 1943 (Penguin). He lives in north London with his wife and two children.

Graphic and chilling. This excellent book paints a little-known and frightening picture of a continent in the embrace of lawlessness and chaos -- Ian Kershaw
Moving, measured and provocative -- Dominic Sandbrook * Sunday Times *
Savage Continent is a powerful and disturbing book, painstakingly researched and written with both authority and an impressive historical sweep -- James Holland
Grimly absorbing, conveys the pity of war and its sorry aftermath with integrity and proper sympathy -- Ian Thomson * Sunday Telegraph *
Extraordinary, disturbing and powerful ... it is to Lowe's great credit that he resists the temptation to sit in moral judgment ... it is time we acknowledged the hidden realities of perhaps the darkest chapter in all human history * Daily Mail *
Extraordinary...exceptional...reveals a continent where moral values were often missing and basically lawlessness prevailed for several years -- Trevor James * The Historian *
Impressive and heart-rendering study...Lowe marshals all the elements of the story with cool even-handedness, especially where statistics are concerned, and explains how subsequent generations have manipulated the historical record to suit their own purposes, either to diminish their guilt or demonise others. -- Christopher Silvester * Daily Express *
An excellent account...Lowe's vivid descriptions of Europeans scrambling for scraps of food, rampant theft and 'destruction of morals' are a timely reminder that a certain humility is in order when we look at less fortunate continents today. -- Brendan Simms * The Independent *
A major new historical talent has arrived... a brilliantly organised and scrupulously objective survey of a continent on the floor * BBC History Magazine *
Brilliant * Sun *
Savage Continent is a blood-soaked thing, charting the continued fanaticism and brutality that emerged from the ashes of war and wracked this sad continent long after Nazism was defeated * Telegraph, Christmas Round-up *
An unforgettably gritty and blood-soaked book. Makes for deeply harrowing reading -- Dominic Sandbrook * Sunday Times, Books of the Year 2012 *
The chaotic interlude between the second world war and Europe's 'cold peace' in the 1950s receives brilliant treatment in Lowe's scrupulously objective book * Financial Times, "Books of the Year" *
Keith Lowe is widely recognized as a leading authority on the Second World War. He is the author of Inferno: The Devastation of Hamburg, 1943 and Savage Continent, which was a Sunday Times top ten bestseller and won the PEN Hessell-Tiltman Prize. He has spoken often on television and radio, both in Britain and the United States, and his books have been translated into 20 languages. He lives in north London with his wife and two children.
GOR003955843
9780670917464
067091746X
Savage Continent: Europe in the Aftermath of World War II by Keith Lowe
Keith Lowe
Used - Very Good
Hardback
Penguin Books Ltd
2012-04-05
480
Winner of PEN Hessell-Tiltman Prize for History 2013
Book picture is for illustrative purposes only, actual binding, cover or edition may vary.
This is a used book - there is no escaping the fact it has been read by someone else and it will show signs of wear and previous use. Overall we expect it to be in very good condition, but if you are not entirely satisfied please get in touch with us
Trustpilot