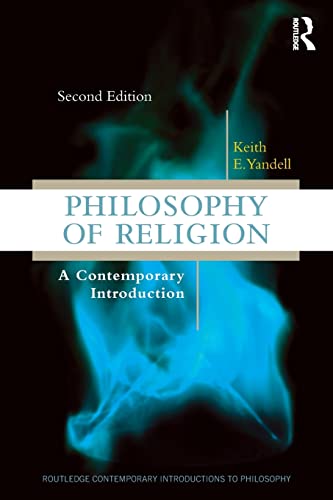 Keith Yandell's Philosophy of Religion: A Contemporary Introduction was one of the first textbooks to explore the philosophy of religion with reference to religions other than Christianity. This new, revised edition explores the logical validity and truth claims of several world religions-Christianity, Judaism, Islam, Hinduism, Buddhism, and Jainism-with updated, streamlined discussions on important topics in philosophy of religion such as:

Other new features include updated Questions for Reflection,and new Annotated Bibliographies for each chapter, as well as an updated Glossary. This exciting new edition, much like its classic predecessor, is sure to be a classroom staple for undergraduate students studying philosophy of religion, as well as a comprehensive introductory read for anyone interested in the subject.

"Keith Yandell is a first-rate philosopher who has written a clear-headed, fair, comprehensive introduction to thinking about the nature and cogency of 'western' and 'eastern' religious beliefs and practices. It is wide-ranging and rich with sustained, engaging arguments about God, the sacred, the self, values, and nature."

Keith E. Yandell is Professor of Philosophy at the University of Wisconsin at Madison.

NLS9780415963701
9780415963701
0415963702
Philosophy of Religion: A Contemporary Introduction by Keith E. Yandell (University of Wisconsin-Madison, USA)
Keith E. Yandell (University of Wisconsin-Madison, USA)
Routledge Contemporary Introductions to Philosophy
New
Paperback
Taylor & Francis Ltd
2016-05-26
320
N/A
Book picture is for illustrative purposes only, actual binding, cover or edition may vary.
This is a new book - be the first to read this copy. With untouched pages and a perfect binding, your brand new copy is ready to be opened for the first time
Trustpilot