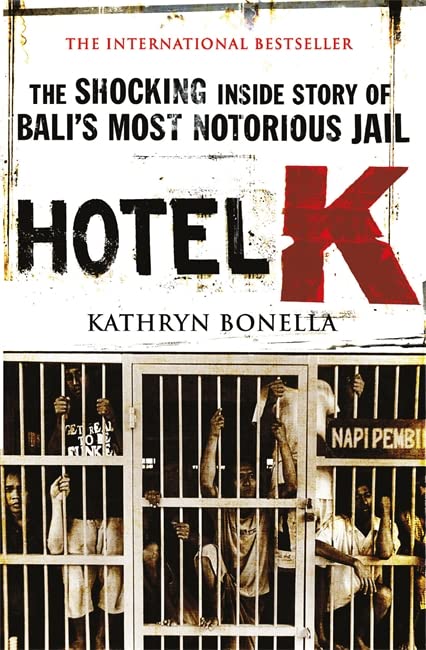 An account of one of the world's most notorious drug-smuggler jails.

Hotel K: The Shocking Inside Story of Bali's Most Notorious Jail by Kathryn Bonella

Hotel K - Bali's most notorious jail - is Hell in Paradise.

Welcome to Hotel Kerobokan, or Hotel K, Bali's most notorious jail. Its walls touch paradise; sparkling oceans, surf beaches and palm trees on one side, while on the other it's a dark, bizarre and truly frightening underworld of sex, drugs, violence and squalor.

Hotel K's filthy and disease ridden cells have been home to the infamous and the tragic: a Balinese King, Gordon Ramsay's brother, Muslim terror bombers, beautiful women tourists and surfers from across the globe. Petty thieves share cells with killers, rapists, and gangsters. Hardened drug traffickers sleep alongside unlucky tourists, who've seen their holiday turn from paradise to hell over one ecstasy pill.

Hotel K is the shocking inside story of the jail and its inmates, revealing the wild 'sex nights' organised by corrupt guards for the prisoners who have cash to pay, the jail's ecstasy factory, the killings made to look like suicides, the days out at the beach, the escapes and the corruption that means anything is for sale - including a fully catered Italian jail wedding, or a luxury cell upgrade with a Bose sound system.

The truth about the dark heart of Bali explodes off the page.

Kathryn Bonella lived in London for several years, freelancing for numerous English and American television programmes, magazines and newspapers. She returned to Australia in 2000 to work as a full-time TV producer. She moved to Bali in 2005 to research and write Schapelle Corby's bestselling autobiography, My Story. Subsequently she has written the international bestsellers Hotel K and Snowing in Bali.
Author's note. Foreword: For One Night Only. Welcome to Hotel Kerobokan. Thomas. The Headless Corpse. The Great Escape. Let's Play. No Star to Five Star. Touching Paradise. The Women's Block. The Blue Room. Plasticine Guards. Terrorists and the King Check In. The Dealers. Rolling the Dice. Animal Farm. With Friends Like These. An Eye for an Eye. Sex on the Beach. Raids. Kerobokan Crew. Room 13. No More Tomorrows. Operation Transfer. Where Are They Now? Acknowledgements.
GOR003623105
9780857382696
0857382691
Hotel K: The Shocking Inside Story of Bali's Most Notorious Jail by Kathryn Bonella
Kathryn Bonella
Used - Very Good
Paperback
Quercus Publishing
2012-02-02
320
N/A
Book picture is for illustrative purposes only, actual binding, cover or edition may vary.
This is a used book - there is no escaping the fact it has been read by someone else and it will show signs of wear and previous use. Overall we expect it to be in very good condition, but if you are not entirely satisfied please get in touch with us
Trustpilot