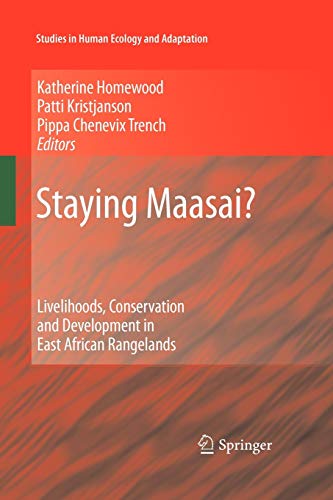 Over the last decade or so, community conservation has emerged as a way out of poverty and environmental problems for these rural populations, focusing on the sustainable use of wildlife to generate income that could underpin equally sustainable development.

The area of eastern Africa, which includes Tanzania and Kenya, is known for its savannas, wildlife and tribal peoples. Alongside these iconic images lie concerns about environmental degradation, declining wildlife populations, and about worsening poverty of pastoral peoples. East Africa presents in microcosm the paradox so widely seen across sub Saharan Africa, where the world's poorest and most vulnerable populations live alongside some of the world's most outstanding biodiversity resources.

Over the last decade or so, community conservation has emerged as a way out of poverty and environmental problems for these rural populations, focusing on the sustainable use of wildlife to generate income that could underpin equally sustainable development. Given the enduring interest in East African wildlife, and the very large tourist income it generates, these communities and ecosystems seem a natural case for green development based on community conservation.

This volume is focused on the livelihoods of the Maasai in two different countries - Kenya and Tanzania. This cross-border comparative analysis looks at what people do, why they choose to do it, with what success and with what implications for wildlife. The comparative approach makes it possible to unpack the interaction of conservation and development, to identify the main drivers of livelihoods change and the main outcomes of wildlife conservation or other land use policies, while controlling for confounding factors in these semi-arid and perennially variable systems. This synthesis draws out lessons about the successes and failures of community conservation-based approach to development in Maasailand under different national political and economic contexts and different local social and historical particularities.

From the reviews: "This book is a product of a collaborative research programme 'Assessing trade-offs between poverty alleviation and wildlife conservation', and coordinated by the International Livestock Research Institute in Nairobi. ... provides in-depth description of the methodological approaches taken in the analysing livelihoods in the case studies. ... this will provide a valuable resource for researchers developing similar studies. ... an extremely useful resource for scholars and students of pastoralism. ... The book is extremely densely and precisely written, and provides a comprehensive review of the literature." (Nicky Allsopp, African Journal of Range & Forage Science, Vol. 26 (3), 2009)
Family Portraits - Mara.- Changing Land Use, Livelihoods and Wildlife Conservation in Maasailand.- Methods in the Analysis of Maasai Livelihoods.- Maasai Mara - Land Privatization and Wildlife Decline: Can Conservation Pay Its Way?.- Assessing Returns to Land and Changing Livelihood Strategies in Kitengela.- Family Portraits - Amboseli.- Pathways of Continuity and Change: Maasai Livelihoods in Amboseli, Kajiado District, Kenya.- Family Portraits - Longido.- Still "People of Cattle"? Livelihoods, Diversification and Community Conservation in Longido District.- Family Portraits - Tarangire.- Cattle and Crops, Tourism and Tanzanite: Poverty, Land-Use Change and Conservation in Simanjiro District, Tanzania.- Community-Based Conservation and Maasai Livelihoods in Tanzania.- Policy and Practice in Kenya Rangelands: Impacts on Livelihoods and Wildlife.- Staying Maasai? Pastoral Livelihoods, Diversification and the Role of Wildlife in Development.
NLS9780387874913
9780387874913
0387874917
Staying Maasai?: Livelihoods, Conservation and Development in East African Rangelands by Katherine Homewood
Katherine Homewood
Studies in Human Ecology and Adaptation
New
Hardback
Springer-Verlag New York Inc.
2009-02-11
418
N/A
Book picture is for illustrative purposes only, actual binding, cover or edition may vary.
This is a new book - be the first to read this copy. With untouched pages and a perfect binding, your brand new copy is ready to be opened for the first time
Trustpilot