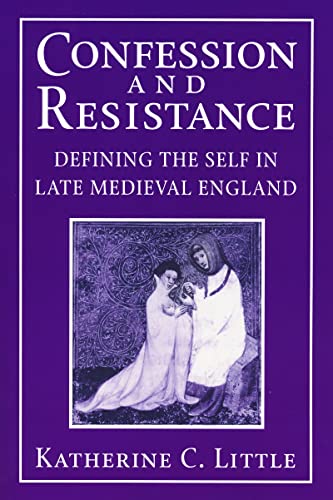 Cautions that medieval selfhood should not be understood merely in terms of confessional practice. The author points to the controversy over confession and, more generally, lay instruction that was generated in late medieval England around the heresy known as Wycliffism (or Lollardy).

Confession and Resistance: Defining the Self in Late Medieval England by Katherine C. Little

In Confession and Resistance, Katherine C. Little cautions that medieval selfhood should not be understood merely in terms of confessional practice. She points to the controversy over confession and, more generally, lay instruction that was generated in late medieval England around the heresy known as Wycliffism (or Lollardy). This controversy, she maintains, reveals the contested nature of the language of medieval selfhood.

Through her readings of Wycliffite sermons and polemical writings, Little argues that the Lollard resistance to confession should be understood as a debate over self-formation. For the Wycliffites, traditional confessional language had failed in its expected function-to define the self and to reveal the interior-and had to be replaced with new terms and new stories taken from the Bible. This new view of Wycliffism, as a crisis in the language of selfhood, allows the author to reevaluate the impact of Wycliffite ideas in Chaucer's Parson's Tale, Gower's Confessio Amantis, and Hoccleve's Regiment of Princes. Little finds in these texts, all of which include confession as a theme, a similar concern with the inadequacy of the traditional confessional mode.

Little is most successful . . . with Hoccleve because here we do indeed have a writer of the post-1401 generation, and one of explicit autobiographical bent. Although I would tend to place the Old Man's discourse in Hoccleve's Regiment as much in the consolatio genre as in the confessio genre, Little's argument, based on the latter, succeeds for that genre. -- American Historical Review
Confession and Resistance is a significant contribution to our understanding of late medieval Christianity and culture in England. Little shows the inventiveness with which Chaucer, Gower, and Hoccleve engage with Wycliffite textuality and ideology, often assimilating these as sources of a self-reflexive and vigorous orthodoxy cultivated by a learned, 'clerical' laity. Her focus should make the book of interest to those working in early modern fields as well as to medievalists. -- David Aers, James B. Duke Professor of E
This concise study explores the impact of Wycliffite challenges to an auricular confession on the development of selfhood or discourses of the 'interior.' . . . [The book] has plenty to offer by the way of suggestion and inspiration for further work on the history of subjectivity, on the genre of confession, and on the legacy of Wycliffism. -- Modern Philosophy
Our understanding of the intricacies of medieval thinking about the self is still less sophisticated than it needs to be, if we are ever to have a full history of the western subject. Built around a series of readings of Middle English theorizations of the self, confession, and community, this carefully-focused and well-written book significantly advances our thinking on these closely related topics. On the way to its goal, Little's study also illuminates several other areas of current interest in medieval studies: the exemplum as a system of teaching and object of suspicion; the fault-line between Lollardy and fourteenth-century orthodoxy; and the impact of the Lollard controversy on the new patterns of orthodox belief and practice that emerged in the fifteenth century. -- Nicholas Watson, Harvard University
In this book, the author looks at the Wycliffite movement in late fourteenth- and early fifteenth-century England to examine not its theology but its importance for the history of self-definition. The discussion is based on the theories of Foucault and Benveniste about the uses of the sacrament of confession, language, and narrative to form late medieval selves...This book has solid scholarship, with copious use of primary sources, an extensive bibliography, and intelligent reinterpretations. -- The Historian
Quite appropriately in a book so concerned with language and its ability to shape perceptions and definitions, Little has written a careful and well-crafted analysis of language as it was employed by the church, the Wycliffites, and those who lived during the time the two came into conflict. She integrates this compelling analysis with a well-balanced foundation in theoretical concerns as well as the scholarly work that has preceded her own. She has produced a valuable contribution to the scholarly discourse on Wycliffite heresy and on late medieval subjectivity in the form of an engaging and accessible piece of scholarship. -- Comitatus
Confession and Resistance examines penitential discourses as sources of a language of subject formation, or as Little prefers to call it, 'self-definition.' . . . Little seeks to demonstrate that there may be simultaneously a variety of competing discourses by examining texts produced during the period when the Wycliffites challenged the theology and institutions of penance. . . . The analyses are finely done, offering persuasive insights, new perspectives, and much to think about. -- Speculum
Katherine C. Little is assistant professor of English at Fordham University.
NLS9780268033767
9780268033767
0268033765
Confession and Resistance: Defining the Self in Late Medieval England by Katherine C. Little
Katherine C. Little
New
Paperback
University of Notre Dame Press
2006-02-03
204
N/A
Book picture is for illustrative purposes only, actual binding, cover or edition may vary.
This is a new book - be the first to read this copy. With untouched pages and a perfect binding, your brand new copy is ready to be opened for the first time
Trustpilot