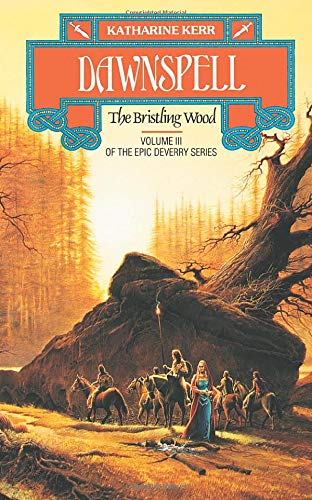 Over a thousand years ago the People of Deverry were driven from their splendid kingdom by their enemy, the Hordes, and forced to find sanctuary in the remote forests in the east of their lands where they eventually settled.

Succeeding generations remembered these terrible events as the Burning - and they never forgot the cities, towns and marvels of the far, far west. DAWNSPELL, the third compelling volume in Katharine Kerr's epic Deverry series, continues the bold saga of Nevyn, Rhodry and Jill as they battle with the evil forces threatening the world of Deverry in the decades that follow the Burning.

Katharine Kerr was born in Ohio and moved to San Francisco Bay Area in 1962, where she has lived ever since. She has read extensively in the fields of classical archeology, and medieval and dark ages history and literature, and these influences are clear in her work. Her epic Deverry series has won widespread praise and millions of fans around the world.