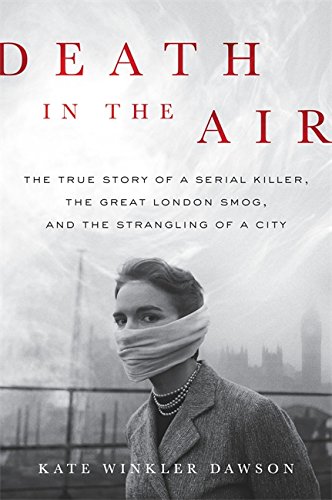 Death in the Air by Kate Winkler Dawson

A real-life thriller in the vein of Erik Larson's The Devil in the White City and John Berendt's Midnight in the Garden of Good and Evil, Kate Winkler Dawson's debut Death in the Air is a gripping, historical narrative of a serial killer, an environmental disaster, and an iconic city struggling to regain its footing.

Death in the Air: The True Story of a Serial Killer, the Great London Smog, and the Strangling of a City by Kate Winkler Dawson

In winter 1952, London automobiles and thousands of coal-burning hearths belched particulate matter into the air. But the smog that descended on December 5th of 1952 was different; it was a type that held the city hostage for five long days. Mass transit ground to a halt, criminals roamed the streets, and 12,000 people died. That same month, there was another killer at large in London: John Reginald Christie, who murdered at least seven women. In a braided narrative that draws on extensive interviews, never-before-published material, and archival research, Dawson captivatingly recounts the intersecting stories of the these two killers and their longstanding impact on modern history.
"Deeply researched and densely atmospheric."--New York Times Book Review

"For five days in December of that year, London was blanketed by a yellow toxic vapor that smothered its inhabitants. Journalist Kate Winkler Dawson has written an intriguing book about this silent disaster, which was borne out of a perfect storm of freak weather patterns and environmental ignorance. . . . The lessons for the present, Dawson suggests, are as clear as the air in front of our eyes."--Maureen Corrigan, "Fresh Air"
"In 1952, post-World War II London was battling more than reconstruction, and Kate Winkler Dawson's Death in the Air: The True Story of a Serial Killer, The Great London Smog, and the Strangling of a City is a stellar examination of a turbulent time in the city's history. . . . Dawson's background in documentaries and journalism makes this journey more than just a retelling of the facts. She tracked down people who lived it, and now readers will vividly experience that period as well."--Associated Press
"Ms. Dawson, a journalist and documentary producer, is an assiduous researcher...her portraits of the ordinary people confronted by the depredations of the fog and Christie are moving. Ms. Dawson cogently argues that the Conservative government's response to the crisis was shameful: It did everything it could, seemingly, to cover up the extent of the catastrophe and avoid addressing the emergency."--Wall Street Journal

"What's scarier: A murderous madman (now known to be John Reginald Christie) or an environmental disaster?"-- Los Angeles Times
"Kate Winkler Dawson's Death in the Air: The True Story of a Serial Killer, The Great London Smog, and the Strangling of a City is a stellar examination of a turbulent time in the city's history. . . . Dawson's background in documentaries and journalism makes this journey more than just a retelling of the facts. She tracked down people who lived it, and now readers will vividly experience that period as well."-- Associated Press
"Journalist Dawson writes the parallel, shocking histories of the suffocating smog that menaced London, ultimately killing thousands, in December 1952, and a serial killer's salacious murders and trial the following year. Focusing on the powerful press' response to both killers and offering food for thought on what constitutes crime, responsibility, and progress, Dawson delves into heated parliamentary debates between Churchill's Conservative cabinet and Laborite agitators; first-person accounts from doctors, policemen, and other smog survivors; court records; and Christie's own, jaw-dropping account of his murders."--Booklist
"Tendrils of sickening fog creep everywhere in this book, and terror lurks in the shadows. Dawson skillfully weaves these two events into a substantial narrative that will appeal to all types of readers."--Library Journal (starred review)

"Evocative . . . vividly atmospheric . . . The narratives add up to a grim, Dickensian portrait of postwar London: broke, grimy, dejected, deranged around the edges, and gasping for breath."--Publishers Weekly
"Dawson has reached deep into the past and pulled forth a spellbinding, darkly gothic tale of two serial killers--only one of which was human. Death in the Air surprised me, entranced me, and changed the way I see one of the most urgent issues facing the world today."--Alexandria Marzano-Lesnevich, author of The Fact of a Body
"What's great about Death in the Air is not just its stunning premise, but also its deep reach into the life of London in the mid-twentieth century. It's a wonderful read. Welcome to the metaphysics of fog."--S. C. Gwynne, New York Times bestselling author of Empire of the Summer Moon and Rebel Yell
"Death in the Air by Kate Winkler Dawson is a fascinating, beautifully researched, and compulsively readable book, which tells the entwined stories of the Great London Smog of 1952 and a serial killer, John Reginald Christie, who exploited the fog as a cloak for murder. This is a portrait of London at one of its darkest and most desperate times. Not since The Devil in the White City has a book told such a harrowing tale."--Douglas Preston, #1 New York Times bestselling author of The Monster of Florence and The Lost City of the Monkey God
"A deranged maniac plays Fleet Street's reporters like a fiddle at the same time that an industrial-age climate disaster explodes into a full-blown humanitarian crisis. Richly detailed and shrewdly told, Kate Winkler Dawson's Death in the Air is as suspenseful as it is chillingly relevant."--Robert Kolker, New York Times bestselling author of Lost Girls
"Just when you think true crime can't get more interesting, here comes Kate Dawson with her imaginatively conceived and meticulously researched tale about Reg Christie, the fastidious, soft-voiced London clerk who embarks on a vicious killing spree in 1952 just as a deadly fog descends on London. But Death in the Air is hardly another study of a depraved serial killer. It's also a riveting history of London in the years after World War II--a city beset by political cover ups and misguided police investigations. Dawson's ability to weave together so many separate strands of one story is simply magnificent."--Skip Hollandsworth, author of The Midnight Assassin: The Hunt for America's First Serial Killer
"Dawson deftly weaves the tales together in an engrossing narrative that reads like a thriller.... readers will remain hooked on this compelling story and will eagerly await Dawson's next book."--Kirkus
"I was seven, and living in London, when these two dreadful and murderous events uncoiled, and I--asthmatic as a result--remember them still. It seems to me that only an outsider, a non-Londoner, could possibly bring them so vividly, so excruciatingly and so unflinchingly back to life. Kate Winkler Dawson has done the history of my city a great service, and she is to be commended for telling a terrible tale memorably and brilliantly."--Simon Winchester, New York Times bestselling author of The Professor and the Madman
"A London peasouper hangs over the city as a serial killer stalks its streets! This is a true tale of criminal violence against the backdrop of one of the worst environmental disasters of all time, one that led to the death of 12,000 people. It is a narrative that has relevance to the world's pollution problems of today and is also an engrossing read."--Christine L. Corton, author of London Fog: The Biography
Kate Winkler Dawson is a seasoned documentary producer, whose work has appeared in The New York Times, WCBS News and ABC News Radio, Fox News Channel, United Press International, PBS NewsHour, and Nightline. She teaches journalism at The University of Texas at Austin.
NPB9780316506861
9780316506861
0316506869
Death in the Air: The True Story of a Serial Killer, the Great London Smog, and the Strangling of a City by Kate Winkler Dawson
Kate Winkler Dawson
New
Hardback
Little, Brown & Company
2017-10-17
320
N/A
Book picture is for illustrative purposes only, actual binding, cover or edition may vary.
This is a new book - be the first to read this copy. With untouched pages and a perfect binding, your brand new copy is ready to be opened for the first time
Trustpilot