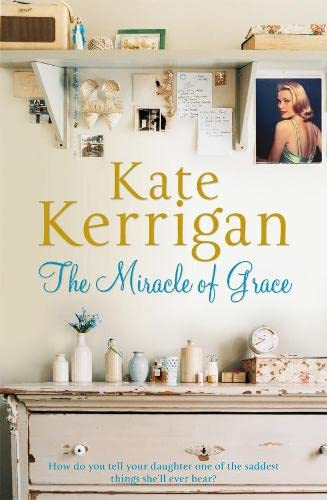 The Miracle of Grace by Kate Kerrigan

A startling novel of motherhood, love and death from the author of Recipes for a Perfect Marriage

The Miracle of Grace by Kate Kerrigan

Grace's mother Eileen is a great list maker, so when Grace walks into Eileen's kitchen to drop off a postal package and sees her garish 'To Do' pad on the counter, she thinks nothing of it, until she sneaks a look. There, at No 8, ranked in importance well below bread, telephone bill and bins is 'Tell G I have ovarian cancer, probably terminal'. Grace goes into shock, primarily at the thought that her mother is dying, but also at the fact that her mother simply couldn't tell her to her face. Is their relationship really so bad?

Eileen has been brought up in rural Ireland in the 1950s, in thrall to the rules of her community - church first, then husband, then children. So she's had little time for herself and even now finds it impossible to put her own problems and desires to the fore. It is only when Grace confronts her, that she is able to go back over her past, to her own childhood, her early marriage, and the birth of her cherished only daughter to find memories of happiness and unbearable tragedy that have coloured her life forever.

The Miracle of Grace is a poignant, but ultimately uplifting, novel that reveals a unique relationship between a mother and her daughter, and tells of a woman whose life has been restricted by the mores of duty, honour, and religion but who yearns for love.

Kate Kerrigan was born in Scotland to Irish parents and reared in London. She began her career in Journalism at the age of nineteen rising to become editor of various publications before moving to Ireland in 1990 to become a full-time author. Living in the picturesque village of Killala on the west coast of Ireland, she has two sons Leo and Tom with husband Niall. Her novels include Recipes for a Perfect Marriage which was shortlisted for the 2006 Romantic Novel of the Year Award and Miracle of Grace. Ellis Island was a TV Book Club Summer Read and the story of Ellie Hogan was continued in City of Hope published in 2012. Land of Dreams, the final part in this compelling trilogy, publishes in 2013. www.katekerrigan.ie http://katekerriganauthor.blogspot.com/
GOR000659363
9780230014787
023001478X
The Miracle of Grace by Kate Kerrigan
Kate Kerrigan
Used - Very Good
Paperback
Pan Macmillan
2007-08-31
288
N/A
Book picture is for illustrative purposes only, actual binding, cover or edition may vary.
This is a used book - there is no escaping the fact it has been read by someone else and it will show signs of wear and previous use. Overall we expect it to be in very good condition, but if you are not entirely satisfied please get in touch with us
Trustpilot