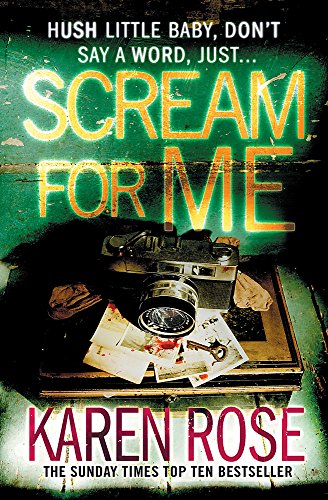 Held captive by a killer, will a young girl escape his clutches? SCREAM FOR ME is a terrifying thriller from bestselling Karen Rose, and part of the Philadelphia/Atlantic series, featuring Daniel Vartanian. 'Unforgettable' James Patterson.

Held captive by a killer, will a young girl escape his clutches? SCREAM FOR ME is a terrifying thriller from bestselling Karen Rose, and part of the Philadelphia/Atlantic series, featuring Daniel Vartanian. 'Unforgettable' James Patterson.

Special Agent Daniel Vartanian has made a horrific discovery - photographs, taken years ago by his brother Simon, show a gang of teenagers raping young girls. Disgusted, Vartanian vows to bring them all to justice.

Bailey Crighton is being held captive by a monster. Alone and unable to escape, all she can do is scream for help. Vartanian and Alex must now confront their pasts head-on if they are to find Bailey - before it's too late...

'From the first rousing chapter to the last, SCREAM FOR ME is intense, complex, and unforgettable' * James Patterson *
'A thriller that kicks it into over-drive from the very first paragraph and never once lets up...A first-rate, top-tier thriller' * Lorenzo Carcaterra *
'An intricately plotted romantic thriller...Will leave Rose's fans breathlessly anticipating her next release' * Publishers Weekly *
Karen Rose was introduced to suspense and horror at the tender age of eight when she accidentally read Poe's The Pit and The Pendulum and was afraid to go to sleep for years. She now enjoys writing books that make other people afraid to go to sleep. Karen lives in Florida with her family, their cat, Bella, and two dogs, Loki and Freya. When she's not writing, she enjoys reading, and her new hobby - knitting.
GOR003471184
9780755385232
0755385233
Scream For Me (The Philadelphia/Atlanta Series Book 2) by Karen Rose
Karen Rose
Philadelphia/Atlanta Series
Used - Very Good
Paperback
Headline Publishing Group
2011-03-03
672
N/A
Book picture is for illustrative purposes only, actual binding, cover or edition may vary.
This is a used book - there is no escaping the fact it has been read by someone else and it will show signs of wear and previous use. Overall we expect it to be in very good condition, but if you are not entirely satisfied please get in touch with us
Trustpilot