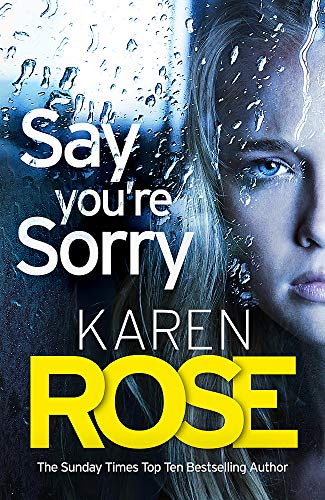 Say You're Sorry (The Sacramento Series Book 1) by Karen Rose

Say You're Sorry (The Sacramento Series Book 1): when a killer closes in, there's only one way to stay alive by Karen Rose

Special Agent Gideon Reynolds has tried hard to put his past behind him. He escaped the violence of his cult upbringing when he was just thirteen, and since then routine and discipline have been his way of making sense of the world. But when a petite blonde woman crashes into his life, he begins to realise that a little bit of chaos might not be so bad.

Daisy Dawson has had more than her fair share of pain too - but she's done being a victim. Daisy's determined to explore every new experience she can - including getting to know the dark and serious FBI investigator she meets when she fights off a masked attacker one night.

It soon becomes clear that Daisy's attack was just the beginning. Now the bloodied bodies of young women are showing up all over California, and, as Gideon tries to find the killer, it's clear that Daisy is in more danger than they ever realised...

Intense, complex and unforgettableFast and furious - SunRose . . . effortlessly balances romance and crime. . . an excellent example of how far-reaching and varied romance can be - New York TimesKaren Rose delivers the kind of high-wire suspense that keeps you riveted - Lisa GardnerA high-octane thrill ride that kept me on the edge of my seat and up far too late at night!Takes off like a house afire . . . Action and chills galore
Karen Rose was introduced to suspense and horror at the tender age of eight when she accidentally read Poe's The Pit and The Pendulum and was afraid to go to sleep for years. She now enjoys writing books that make other people afraid to go to sleep. Karen lives in Florida with her family, their cat, Bella, and two dogs, Loki and Freya. When she's not writing, she enjoys reading, and her new hobby - knitting.
GOR009853516
9781472244185
1472244184
Say You're Sorry (The Sacramento Series Book 1): when a killer closes in, there's only one way to stay alive by Karen Rose
Karen Rose
Used - Very Good
Paperback
Headline Publishing Group
2019-02-12
544
N/A
Book picture is for illustrative purposes only, actual binding, cover or edition may vary.
This is a used book - there is no escaping the fact it has been read by someone else and it will show signs of wear and previous use. Overall we expect it to be in very good condition, but if you are not entirely satisfied please get in touch with us
Trustpilot