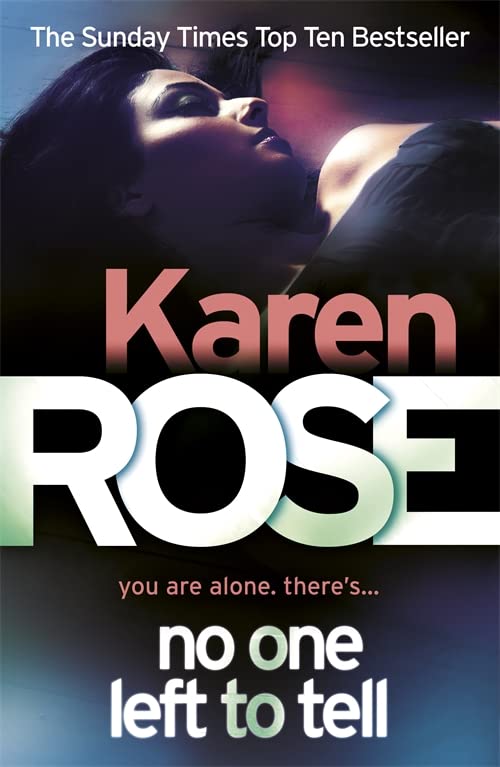 Are you always guilty until proven innocent? NO ONE LEFT TO TELL is a chilling thriller from the bestselling Karen Rose, and part of her Baltimore series.

Are you always guilty until proven innocent? NO ONE LEFT TO TELL is a chilling thriller from the bestselling Karen Rose, and part of her Baltimore series.

Ramon Munoz has spent five years in prison, convicted of a murder his family is convinced he didn't commit. In desperation they turn to private investigator Paige Holden for help.

Paige cannot resist the family's pleas, but when Ramon's wife is brutally executed she is thrown headlong into a case which will place her job, her friends and her life in jeopardy.

As Paige risks everything to prove Ramon was set up, she comes to realise that there is more at stake if Ramon is freed than she could have ever guessed. Can Paige stay alive long enough to unmask an unstoppable killer who will not rest until there's no one left to tell?

'More shockingly detailed than anything in Karin Slaughter or Patricia Cornwell's thrillers' * Irish Independent *
'Intense, complex, and unforgettable' * James Patterson *
Karen Rose was introduced to suspense and horror at the tender age of eight when she accidentally read Poe's The Pit and The Pendulum and was afraid to go to sleep for years. She now enjoys writing books that make other people afraid to go to sleep. Karen lives in Florida with her family, their cat, Bella, and two dogs, Loki and Freya. When she's not writing, she enjoys reading, and her new hobby - knitting.
GOR003815198
9780755373963
0755373960
No One Left To Tell (The Baltimore Series Book 2) by Karen Rose
Karen Rose
Used - Very Good
Paperback
Headline Publishing Group
2012-06-07
560
N/A
Book picture is for illustrative purposes only, actual binding, cover or edition may vary.
This is a used book - there is no escaping the fact it has been read by someone else and it will show signs of wear and previous use. Overall we expect it to be in very good condition, but if you are not entirely satisfied please get in touch with us
Trustpilot