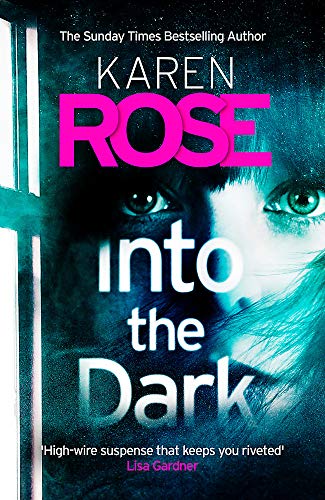 Into the Dark (The Cincinnati Series Book 5) by Karen Rose

Sunday Times bestselling author Karen Rose is back with the gripping fifth instalment of the Cincinnati series. Fans of James Patterson, Karin Slaughter and Tess Gerritsen will love this unputdownable race to stop a serial killer out for revenge.

When Michael Rowland saves his younger brother Joshua from the clutches of his stepfather, he runs for his life with his brother in his arms. From his hiding place he sees the man who has made their lives a misery taken away in the trunk of a stranger's car, never to be seen again.

Doctor Dani Novak has been keeping soccer coach Diesel Kennedy at arm's length to protect him from her dark secrets. When they are brought together by the two young brothers who desperately need their help, it seems they might finally be able to leave their damaged pasts behind them.

But as the only witness to the man who kidnapped and murdered his stepfather, Michael is in danger. As Diesel and Dani do all that they can to protect him, their own investigation into the murder uncovers a much darker web of secrets than they could have imagined.

As more bodies start to appear it's clear that this killer wants vengeance. And will wipe out anything that gets in his way...

Rose...effortlessly balances romance and crime... An excellent example of how far-reaching and varied romance can be * New York Times *
Karen Rose delivers the kind of high-wire suspense that keeps you riveted -- Lisa Gardner
Nobody blends full-tilt suspense with a dash of romance better...Terrific! * Peterborough Evening Telegraph *
Karen Rose was introduced to suspense and horror at the tender age of eight when she accidentally read Poe's The Pit and The Pendulum and was afraid to go to sleep for years. She now enjoys writing books that make other people afraid to go to sleep. Karen lives in Florida with her family, their cat, Bella, and two dogs, Loki and Freya. When she's not writing, she enjoys reading, and her new hobby - knitting.
GOR010144226
9781472265654
1472265653
Into the Dark (The Cincinnati Series Book 5): the absolutely gripping Sunday Times Top Ten bestseller by Karen Rose
Karen Rose
Used - Very Good
Hardback
Headline Publishing Group
2019-11-14
544
N/A
Book picture is for illustrative purposes only, actual binding, cover or edition may vary.
This is a used book - there is no escaping the fact it has been read by someone else and it will show signs of wear and previous use. Overall we expect it to be in very good condition, but if you are not entirely satisfied please get in touch with us
Trustpilot