Death Is Not Enough (The Baltimore Series Book 6) Karen Rose 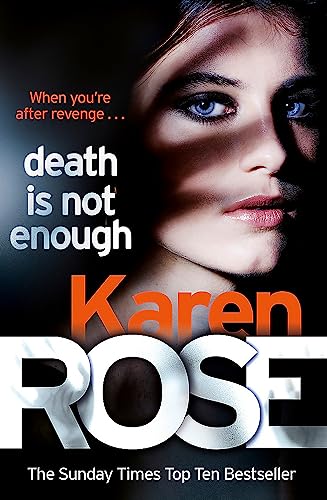 Karen Rose returns with the break-neck follow-up to MONSTER IN THE CLOSET, and the sixth book in the heart-pounding Baltimore Series

A ruthless gang leader. A deadly vendetta. A dark past exhumed... KAREN ROSE returns with the break-neck follow-up to MONSTER IN THE CLOSET, and the sixth book in the heart-pounding Baltimore Series

Gwyn Weaver is as resilient as anyone could be. Having survived an attempted murder, she has rebuilt her life and reclaimed her dignity and strength. She's always known about her feelings for defence attorney Thomas Thorne, but as her friend and a colleague there could be no chance of anything more... or could there?

Thorne has known violence and pain all his life. He's overcome the hardships thanks to his own steel, and the love of his loyal friends. Now he's thinking it might finally be time to let his guard down, and allow himself to let in the woman he's always admired from afar.

Then Thorne's whole world is torn apart - he is found unconscious in his own bed, the lifeless body of a stranger lying next to him, her blood on his hands. Knowing Thorne could never have committed such a terrible crime, Gwyn and his friends rally round to clear his name.

Intense, complex and unforgettable -- James Patterson
Fast and furious * Sun *
Rose . . . effortlessly balances romance and crime. . . an excellent example of how far-reaching and varied romance can be * New York Times *
Karen Rose delivers the kind of high-wire suspense that keeps you riveted * Lisa Gardner *
A high-octane thrill ride that kept me on the edge of my seat and up far too late at night! -- Lisa Jackson
Takes off like a house afire . . . Action and chills galore -- Tess Gerritsen
Karen Rose was introduced to suspense and horror at the tender age of eight when she accidentally read Poe's The Pit and The Pendulum and was afraid to go to sleep for years. She now enjoys writing books that make other people afraid to go to sleep. Karen lives in Florida with her family, their cat, Bella, and two dogs, Loki and Freya. When she's not writing, she enjoys reading, and her new hobby - knitting.
GOR009458786
9781472244086
1472244087
Death Is Not Enough (The Baltimore Series Book 6) by Karen Rose
Karen Rose
Used - Very Good
Paperback
Headline Publishing Group
2018-10-18
528
N/A
Book picture is for illustrative purposes only, actual binding, cover or edition may vary.
This is a used book - there is no escaping the fact it has been read by someone else and it will show signs of wear and previous use. Overall we expect it to be in very good condition, but if you are not entirely satisfied please get in touch with us
Trustpilot