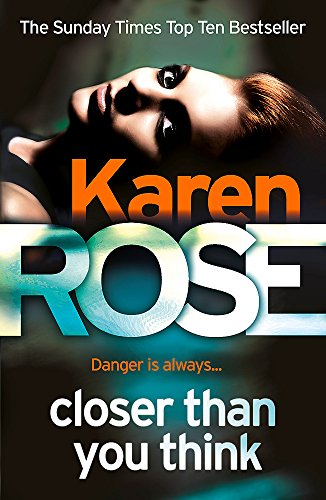 Electrifying. Addictive. Suspenseful. Karen Rose, the multiple Sunday Times Top Ten bestseller, returns with a new Cincinnati series. A killer has made Faith Corcoran's house his playground. Can she stop him before she becomes his target? James Patterson says her novels are 'intense, complex and unforgettable'. Have you read Karen Rose yet?

CLOSER THAN YOU THINK is the gripping first novel in the Cincinnati series and sees Sunday Times bestseller Karen Rose at her tense, tantalising and thrilling best. 'Intense, complex and unforgettable' James Patterson.

Deacon Novak has returned home. The experienced FBI Agent knows that his move to Cincinnati's Major Crime Enforcement Squad will be challenging, but the greater challenge will be saving his younger brother before he becomes the kind of criminal Deacon is chasing.

Faith Corcoran has escaped her identity. Being a therapist to victims of sex crimes was rewarding, but her work with their offenders has jeopardized her life. Her move represents a chance to build a new life in the empty old house her grandmother has left her.

What Faith doesn't know is that a killer has made the house his playground, taking girls into the basement and murdering them. And now Faith is about disturb his fun.

With a murderer focused on her, Faith is going to have to put her trust in Deacon if she's going to survive. Because this killer is always closer than she thinks....

Intense, complex and unforgettable -- James Patterson
Fast and furious * Sun *
Karen Rose was introduced to suspense and horror at the tender age of eight when she accidentally read Poe's The Pit and The Pendulum and was afraid to go to sleep for years. She now enjoys writing books that make other people afraid to go to sleep. Karen lives in Florida with her family, their cat, Bella, and two dogs, Loki and Freya. When she's not writing, she enjoys reading, and her new hobby - knitting.
GOR006464795
9780755389971
0755389972
Closer Than You Think (The Cincinnati Series Book 1) by Karen Rose
Karen Rose
Cincinnati Series
Used - Very Good
Paperback
Headline Publishing Group
2015-02-12
704
N/A
Book picture is for illustrative purposes only, actual binding, cover or edition may vary.
This is a used book - there is no escaping the fact it has been read by someone else and it will show signs of wear and previous use. Overall we expect it to be in very good condition, but if you are not entirely satisfied please get in touch with us
Trustpilot