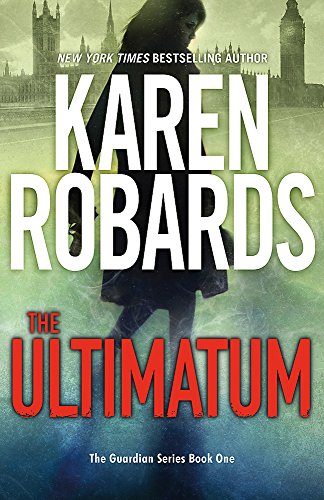 The Ultimatum by Karen Robards

The Ultimatum: The Guardian Series Book 1 by Karen Robards

Action-packed, fact-paced thriller perfect for fans of Karen Rose and the RED SPARROW movie. The second book in the series, The Moscow Deception, is available to buy now

Bianca St. Ives is smart, talented and beautiful. She's also a high-end thief, a master manipulator, a card shark, and a genius of disguise.

A femme fatale Robin Hood running a multinational firm with her father, she makes a living swindling con men out of money they stole and giving it back to those who should rightfully have it, keeping a little for herself of course. Her father has prepared her well to carry on the family business, and now the prodigy has surpassed the master.

Their latest mission didn't go to plan - millions of dollars and top secret government documents went missing, and her father was supposedly killed. But not everyone believes in his death, including the US government. They'll stop at nothing to capture Richard St. Ives - a high-value target who has been on most-wanted lists all over the world - even if it means using Bianca as bait.

With only a fellow criminals for backup and her life on the line, it's up to Bianca to uncover the terrifying truth behind what really happened . . . and set it right, before it's too late.

Thrilling ... A fun and sexy read. * Booklist *
The latest from thriller-master Robards is an enthralling high-stakes caper novel . . . Readers won't want this adrenaline-rich story to end. * Booklist (starred review) *
Robards begins a new series with a fascinating main character, blazing action, a Jason Bourne-esque central mystery, and an intriguing cliffhanger ending . . . Fresh, sexy, and eminently readable. * Kirkus Reviews *
Top-notch ... Suspense mixed with heart-pounding sensual tension. * Kirkus Reviews *
One of the most popular voices in women's fiction. * Newsweek *
Robards's visually evocative narrative allows the reader to 'see' Bianca during her escapades . . . Readers who appreciate the thrillers of Iris Johansen, Tess Gerritsen, and Lisa Gardner will enjoy getting to know Bianca St. Ives. * Library Journal *
Top-notch . . . Suspense mixed with heart-pounding sensual tension. * Kirkus Reviews on THE LAST VICTIM *
Filled with gritty thrills and featuring a psychopathic madman, this suspense tale will truly have you on the edge of your seat! * RT Book Reviews on THE LAST VICTIM *
Thrilling . . . A fun and sexy read * Booklist on THE LAST VICTIM *
The action rarely lets up . . . The plot . . . will keep the readers turning the pages. * Publishers Weekly on THE LAST VICTIM *
Robards is one of the most reliable thriller-romance writers in the world. Here she's on top form. It's smart, tense and hard to put down, with a neat romantic twist. * Daily Mail on SLEEPWALKER *
Robards is one terrific storyteller * Chicago Tribune *
Karen Robards is the internationally bestselling author of over fifty novels, which have regularly appeared on the New York Times, USA Today and Publishers Weekly bestseller lists, among others. She is the mother of three boys and lives with her family in her hometown of Louisville, Kentucky. You can find out more at www.karenrobards.com and on Facebook at www.facebook.com/AuthorKarenRobards or follow her on Twitter @TheKarenRobards.
GOR008877602
9781473647367
1473647363
The Ultimatum: The Guardian Series Book 1 by Karen Robards
Karen Robards
The Guardian Series
Used - Very Good
Paperback
Hodder & Stoughton
2017-11-16
336
N/A
Book picture is for illustrative purposes only, actual binding, cover or edition may vary.
This is a used book - there is no escaping the fact it has been read by someone else and it will show signs of wear and previous use. Overall we expect it to be in very good condition, but if you are not entirely satisfied please get in touch with us
Trustpilot