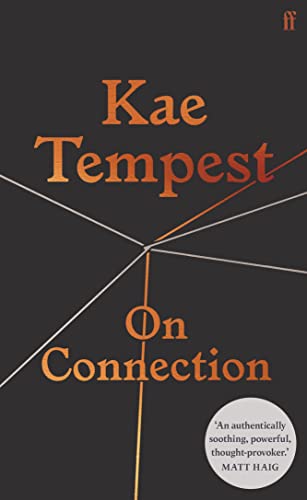 On Connection by Kae Tempest

FROM THE TED HUGHES AWARD WINNER AND SUNDAY TIMES-BESTSELLING AUTHOR The increasingly hyper-individualistic, competitive and exploitative society that we live in has caused a global crisis at the turn of the new decade;

On Connection by Kae Tempest

Beneath the surface we are all connected . . . Award-winning poet, rapper and storyteller Kae Tempest's first work of non-fiction: a meditation on the power of creative connection 'Powerful and merciful.' Ali Smith 'Tempest . . . doesn't just leap off the page, but leaps into your throat and demands to be shouted all the way out.' Marlon James '[Kae's] language hits like lightning. It illuminates and it burns.' Guardian Drawing on twenty years' experience as a writer and performer, Kae Tempest explores how and why creativity - however we choose to practise it - can cultivate greater self-awareness and help us establish a deeper relationship to ourselves and the world. Personal, hopeful and written with piercing clarity, On Connection is a call to arms that speaks to a universal yet intimate truth.
PRAISE FOR PREVIOUS WORKS BY KATE TEMPEST

"Tempest . . . doesn't just leap off the page, but leaps into your throat and demands to be shouted all the way out." -- Marlon James

"Tempest has an ability to write about big, metaphysical subjects in the most vernacular language." -- Michiko Kakutani, The New York Times on HOLD YOUR OWN and BRAND NEW ANCIENTS

"One of the brightest British talents around. Her spoken-word performances have the metre and craft of traditional poetry, the kinetic agitation of hip-hop and the intimacy of a whispered heart-to-heart . . . drawing on ancient mythology and sermonic cadence to tell stories of the everyday." -- Guardian

"[The Bricks that Built the Houses] marks the arrival of a significant new voice . . . deeply affecting: cinematic in scope; touching in its emphatic humanity . . . Tempest's voice--by turns raging and tender--never falters. By the time the novel reaches its cleareyed climax, cleverly undercutting its own promised happy ending, the reader is left with the impression of a work that hums with human life." --The New York Times Book Review, Editors Choice

"Tempest has a knack for the devastating throwaway line--a skill-honed, no doubt, from years of rapping and spoken-word performances. Her work is rich with underlinable lines . . . Captivating." --The New Yorker on THE BRICKS THAT BUILT THE HOUSES

"Blake, Shakespeare, Eliot, the Wu-Tang Clan: when an artist's outlook on boundaries is so dizzyingly open, you long to know what happens next." --Guardian on THE BRICKS THAT BUILT THE HOUSES

"A novel that perfectly captures the modern trials and tribulations of youth and urban life in London." --BuzzFeed on THE BRICKS THAT BUILT THE HOUSES

"[Tempest is] a Zadie Smith if Smith were in her 20s again . . . An artistic prodigy . . . [Her] captivating The Bricks That Built the Houses is rich in detail, clever in plot and filled with characters who live on the edge but never quite give up." --Shelf Awareness on THE BRICKS THAT BUILT THE HOUSES

"This feels a lot like Patti Smith here, in massive wordplay. The sorrows, loss, and rage are the same; and you have to admire the inner beauty coming to surface in serious ways; and more than that, applaud a young artist on a marvelous occasion for driving a dream to the fullest extent just for the flight of it." --Washington Review of Books on LET THEM EAT CHAOS

Kae Tempest is an award-winning, Sunday Times-bestselling author, poet and recording artist. Tempest won the 2013 Ted Hughes Award, was nominated for a Costa Book Award and a BRIT Award, has been shortlisted for the Mercury Prize twice and was nominated for two Ivor Novello Awards. They were also named a Next Generation Poet by the Poetry Book Society, a decennial accolade. They released their fourth studio album, The Book of Traps and Lessons, in 2019, produced by Rick Rubin. Tempest grew up in South-East London, where they still live today. @kaetempest
GOR010766368
9780571354023
0571354025
On Connection by Kae Tempest
Kae Tempest
Used - Like New
Hardback
Faber & Faber
2020-10-01
144
N/A
Book picture is for illustrative purposes only, actual binding, cover or edition may vary.
The book has been read, but looks new. The book cover has no visible wear, and the dust jacket is included if applicable. No missing or damaged pages, no tears, possible very minimal creasing, no underlining or highlighting of text, and no writing in the margins
Trustpilot