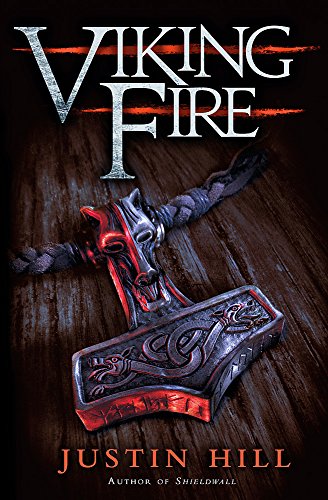 A brilliant, novelistic account of the life of Harald Hardrada (hard ruler), the last of the Vikings.

The year is 1066, and a great general has won a crushing victory over the English just outside the gates of York. His name is Harald Hardrada, King of the Norse, and he is the most brilliant warrior of his age.

Driven into exile as a callow youth, he travelled the known world, deposed emperors, punished the heathens, and took the empress of Constantinople as lover. But there are demons too that he must conquer, and the uncomfortable fact of having a saint for a brother.

He has just won his greatest victory, but a week later he too will be dead, and with his death the Viking Age will come to a close.

Harald Hardrada is the last of the Vikings. This is his tale.

Justin Hill's writing is superb. Every sentence is crafted for balance and beauty and the sense of a world on the edge of turning is gloriously, brilliantly - and utterly believably - evoked -- Manda Scott
Justin Hill's energetic re-creation of Hardrada's career shows that his was an extraordinary life . . . gripping -- Nick Rennison * BBC History *
Gripping * The Times *
Viking Fire is a sophisticated, subtle evocation of a brutal age * Sunday Times *
This evocative tale of war and glory draws us into a Viking world of heroic frozen battlegrounds and treacherous perfumed palaces * Sunday Express *
Fights aplenty, but this is a literary, intelligent read from a masterly storyteller -- Antonia Senior * The Times *

Justin Hill was born in the Bahamas, and grew up in York, attending St Peter's School. He studied Old England and Medieval Literature at Durham University, and spent most of his twenties on postings with Voluntary Service Overseas in rural China and East Africa.
He has written poetry, non-fiction and fiction, which spans eras as distant from one another as Anglo Saxon England, in Shieldwall, to Tang Dynasty, China, in Passing Under Heaven. His work has won numerous awards, including the Geoffrey Faber Memorial Prize, the Somerset Maugham Award, a Betty Trask Award, as well as being selected as a Sunday Times Book of the Year (Shieldwall) and a Washington Post Books of the Year (The Drink and Dream Teahouse).
In 2014 he was selected to write the sequel to the Oscar winning film, Crouching Tiger Hidden Dragon.
He lives near York.

GOR011950662
9781408704509
1408704501
Viking Fire by Justin Hill
Justin Hill
Used - Good
Paperback
Little, Brown Book Group
20160922
384
N/A
Book picture is for illustrative purposes only, actual binding, cover or edition may vary.
This is a used book - there is no escaping the fact it has been read by someone else and it will show signs of wear and previous use. Overall we expect it to be in good condition, but if you are not entirely satisfied please get in touch with us
Trustpilot