Beyond All Evil June Thomson 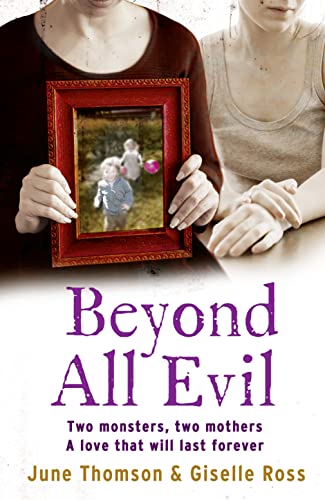 Beyond All Evil by June Thomson

June Thomson and Giselle Ross are inextricably linked by two unspeakable acts of evil. On the same day, a few miles apart, their estranged husbands slaughtered their children. The murders were not driven by rage, or committed in moments of madness. They were planned, and carried out with chilling precision, to inflict the worst pain imaginable.

Beyond All Evil: Two monsters, two mothers, a love that will last forever by June Thomson

June Thomson and Giselle Ross are inextricably linked by two unspeakable acts of evil. On the same day, a few miles apart, their estranged husbands slaughtered their children. The murders were not driven by rage, or committed in moments of madness. They were planned, and carried out with chilling precision, to inflict the worst pain imaginable.

June and Giselle did not know each other. Tragedy is all that binds them; they were destined to come together as `sisters', united by pain, grief and a sense of loss so immense that it would drive both to the brink of madness.

June's life with Rab Thomson had been a dark and turbulent existence, characterised by mental torture, physical violence and rape. Giselle's relationship with Ashok Kalyanjee had been a strange and distant affair, of lives spent apart before, during and after marriage.

But both relationships had produced two beautiful children, and the women believed that their misery was in the past. Both mothers believed it was important to allow the fathers' access to their children. On that fateful Saturday in May 2008, neither could have conceived that the men they had once loved would do anything to harm their children. But they were wrong, so terribly wrong.

Nothing can bring their children back. But June and Giselle have one solitary comfort: they are no longer alone. Their lives may have been torn apart, but they have each other. Together, they are stronger.

This is the story of their parallel journeys: of the dreadful days before, during, and after the murders of their children. Told in their own words, with searing honesty of their pain, and guilt, it is a story of endurance, friendship, and survival against the odds. It is not a story for the faint hearted, but it is a story that must be told, for in the end, it is a testament to the human spirit.

June Thomson was born in Ayrshire. Growing up in a broken home left her with a legacy of loneliness and isolation. When she met and married Rab Thomson she mistook his jealousy for love. She soon learned it was a need to control her. June endured 27 years with a man who beat and raped her. When she finally found the courage to leave, Rab took a hellish revenge.

Giselle Ross was born in Glasgow into a home so loving that she did not leave until she was 32 years old. She was swept off her feet by devious charmer Ashok Kalyanjee. He persuaded her to elope and then quickly isolated her from her family. The relationship was doomed before it began, but when Giselle broke free, there was an appalling price to pay.

Marion Scott and Jim McBeth are a husband and wife team, helping June and Giselle to tell their story. Marion is an award-winning journalist with Scotland's biggest newspaper, The Sunday Mail. As well as winning accolades for her campaigning work on child abuse issues and miscarriages of justice, she has won the Campaigning Journalist of the Year award. Jim has been writing for national newspapers for 43 years. He currently works for the Daily Mail. He has also contributed to a number of national television and BBC radio documentaries.

GOR012489903
9780007438518
0007438516
Beyond All Evil: Two monsters, two mothers, a love that will last forever by June Thomson
June Thomson
Used - Like New
Paperback
HarperCollins Publishers
2011-11-10
304
N/A
Book picture is for illustrative purposes only, actual binding, cover or edition may vary.
The book has been read, but looks new. The book cover has no visible wear, and the dust jacket is included if applicable. No missing or damaged pages, no tears, possible very minimal creasing, no underlining or highlighting of text, and no writing in the margins
Trustpilot