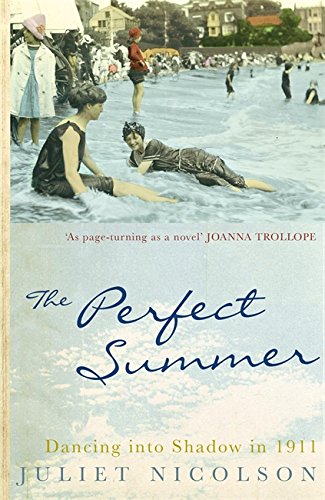 The Perfect Summer by Juliet Nicolson

The enchanting and absorbing story of a remarkable summer; defining a world on the cusp of irrevocable change

The Perfect Summer by Juliet Nicolson

'As page-turning as a novel' Joanna Trollope

One summer of nearly a hundred years ago saw one of the high sunlit meadows of English history. A new king was crowned; audiences swarmed to Covent Garden to see the Ballet Russes and Nijinskys gravity-defying leaps. The aristocracy was at play, bounding from house party to the next; the socialite Lady Michelham travelled with her nineteen yards of pearls. Rupert Brooke (a 23-year-old poet in love with love, Keats, marrons glaces and truth) swam in the river at Grantchester.

But perfection was over-reaching itself. The rumble of thunder from the summer's storms presaged not only the bloody war years ahead: the country was brought to near standstill by industrial strikes, and unrest exposed the chasm between privileged and poor; as if the heat was torturing those imprisoned in society's straitjacket and stifled by the city smog. Children, seeking relief from the scorching sun, drowned in village ponds.

What the protagonists could not have known is that they were playing out the backdrop to WWI; in a few years time the world, let alone England, would never be the same again. Through the eyes of a series of exceptional individuals; a debutante, a suffragette, a politician, a trade unionist, a butler and the Queen; Juliet Nicolson illuminates a turning point in history. With the gifts of a great storyteller she rekindles a vision of a time when the sun shone but its shadows fell on all.

'Juliet Nicolson has taken this 'perfect summer' as the backdrop for an ambitious work of multiple biography, which sets the extravagance of the upper classes against the increasingly desperate lives of the poor' Observer

'Evoke[s] the full vivid richness of how it smelt, looked, sounded, tasted and felt to be alive in England during the months of such a summer' Lady

'An accomplished and engaging piece of social history' * Daily Telegraph *
'[Nicolson] sweeps across voices and classes to assemble a mosaic of sunlit impressions' * Independent: Boyd Tonkin *
Listed as number three of six in the 'Bookseller's Chart' by Phoebe Bentick of Henry Stokes & Co. * The Times *
'With the gifts of a great storyteller, [Nicolson] rekindles a vision of a time when the sun shone, but cast long shadows.' * Waterstone's Books Quarterly *
"Nicolson on swimwear from Victorian times through Brigitte Bardot to today. " * The Spectator *
'Juliet Nicolson has taken this "perfect summer" as the backdrop for an ambitious work of multiple biography, which sets the extravagance of the upper classes against the increasingly desperate lives of the poor.' * Observer *
'I wanted to evoke the full vivid richness of how it smelt, looked, sounded, tasted and felt to be alive in England during the months of such a summer' * The Lady *
'Juliet Nicolson does not pretend to offer a close political analysis, but rather a thoroughly entertaining portrait of the period, full of memorable detail' * The Spectator *
'There is an unpretentious directness about Nicolson's approach to her subjects that gives the book a freshness and vitality. Happily, she also has an eye for the amusing or the ironic.' * The Scotsman, Rachel Billington *
'A fascinating read... I did indeed feel transported' * Mail on Sunday: Antonia Fraser *
'Hugely interesting... It's also - and this is a compliment - as page-turning as a novel' * Guardian Holiday Read Choice: Joanna Trollope *
'Nicolson writes with grace and humour' * Guardian Holiday Read Choice: Antonia Fraser *
'A charming mix of gossip column, commonplace book and popular history, sure to delight readers for many summers to come.' * International Express: Michael Arditti *
'Elegant and witty ... an enjoyable read without pretensions from a rather well-connected writer' * Jad Adams, Sunday Telegraph / Seven *
'Nicolson conjures a moment when the unchanged rituals of English existence began to collide with modern life' * Olivia Laing, Observer *
'She cuts a slice through Edwardian life at the end of the Edwardian age to create a richly atmospheric read' * Kate Chisholm, Daily Mail *
'Nicolson has pulled together many strands in a graceful evocation of one particularly long summer' * Evening Standard *
'Entertaining and informative, it's packed with unforgettable characters and vivid descriptions' * Sainsbury's Magazine *
'This is a peach of a book. It is full of good things, sparkling, elegant and often funny' * Jane Ridley, Literary Review *
'Society history written with skill, a sharp eye and a sense of humour' * TLS, Susie Harries *
'A clever, insightful and ultimately moving account' * BBC History *
'A tiny chapter of English history ... a perfect lightness of touch' * Katie Law, Evening Standard *
'Elegantly poignant ... Nicolson has an eye for prescient anecdotes' * Ruth Scurr,The Times *
A wonderfully evocative portrait of english society on the brink of a new world order. Full of brilliant vignettes of the people and the pleasures that distracted them. Juliet Nicolson has invented a new kind of social history. * Tina Brown *
'Rich and marvellously researched' * Barry Humphries *
'A cleverly crafted story of the hot, frenetic summer of 1911 which works because of the sparkling writing' * Jane Ridley, Literary Review *
Juliet Nicolson is a writer and journalist: she has written for the Daily Telegraph, Vogue, the London Evening Standard, Tatler and the Guardian, amongst others. She was also the editor of the memoirs of Lady Annabel Goldsmith. She read English at the University of Oxford and has worked in publishing in both the UK and the States. The Perfect Summer is Juliet's first book, and draws on a vast range of archive material from sources both intimate and rarely-seen. She is the President of the Kent Branch of the Jane Austen Society, has two daughters and lives in London and Kent.
GOR000349503
9780719562433
0719562430
The Perfect Summer by Juliet Nicolson
Juliet Nicolson
Used - Very Good
Paperback
John Murray Press
2007-07-12
320
N/A
Book picture is for illustrative purposes only, actual binding, cover or edition may vary.
This is a used book - there is no escaping the fact it has been read by someone else and it will show signs of wear and previous use. Overall we expect it to be in very good condition, but if you are not entirely satisfied please get in touch with us
Trustpilot