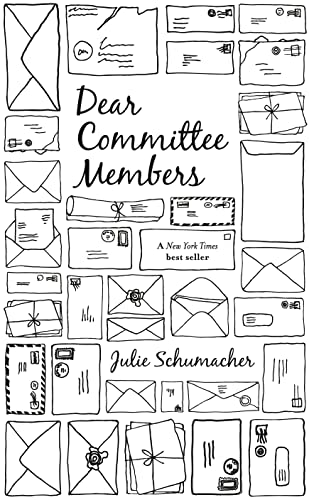 Finally a novel that puts the "pissed" back into "epistolary."

Finally a novel that puts the "pissed" back into "epistolary."

Jason Fitger is a beleaguered professor of creative writing and literature at Payne University, a small and not very distinguished liberal arts college in the midwest. His department is facing draconian cuts and squalid quarters, while one floor above them the Economics Department is getting lavishly remodeled offices. His once-promising writing career is in the doldrums, as is his romantic life, in part as the result of his unwise use of his private affairs for his novels. His star (he thinks) student can't catch a break with his brilliant (he thinks) work Accountant in a Bordello, based on Melville's Bartleby. In short, his life is a tale of woe, and the vehicle this droll and inventive novel uses to tell that tale is a series of hilarious letters of recommendation that Fitger is endlessly called upon by his students and colleagues to produce, each one of which is a small masterpiece of high dudgeon, low spirits, and passive-aggressive strategies. We recommend Dear Committee Members to you in the strongest possible terms.

'The art of writing letters is slowly disappearing, but Julie Schumacher's hilarious, heart-warming and, at times, sad, novel Dear Committee Members is a perfect illustration of the power of words written in ink on paper. Epistolary novels are difficult to pull off, but Schumacher succeeds, putting together a novel through which the voice and character of the protagonist shine through in every funny, painful, cringe-worthy and heartbreaking letter.' Sarah Shaffi, The Bookseller

`A funny and lacerating novel of academia written in the form of letters of recommendation.' Slate

JULIE SCHUMACHER grew up in Wilmington, Delaware, and graduated from Oberlin College and Cornell University. Her first novel, The Body Is Water, was published by Soho Press in 1995 and was an ALA Notable Book of the Year and a finalist for the PEN/Hemingway Award and the Minnesota Book Award. Her other books include a short story collection, An Explanation for Chaos, and five books for younger readers. She lives in St. Paul and is a faculty member in the Creative Writing Program and the Department of English at the University of Minnesota. Visit her on the web at julieschumacher.com.

GOR006337716
9780007586349
0007586345
Dear Committee Members by Julie Schumacher
Julie Schumacher
Used - Very Good
Hardback
HarperCollins Publishers
2014-10-09
300
N/A
Book picture is for illustrative purposes only, actual binding, cover or edition may vary.
This is a used book - there is no escaping the fact it has been read by someone else and it will show signs of wear and previous use. Overall we expect it to be in very good condition, but if you are not entirely satisfied please get in touch with us
Trustpilot