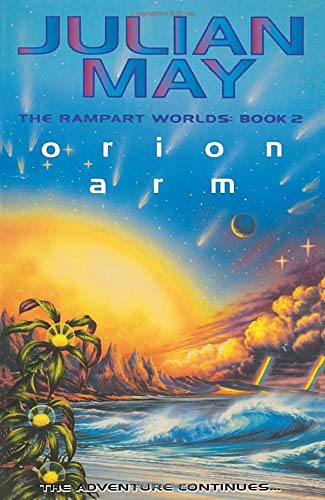 Orion Arm by Julian May

A gripping sf adventure from the acclaimed author of The Pliocene Exile series.

Orion Arm: The Rampart Worlds: Book 2 by Julian May

A gripping sf adventure from the acclaimed author of The Pliocene Exile series.

Two hundred years into the future, the great corporations of Earth dominate all life in our Galaxy. But their endless pursuit of wealth and power is about to open the door to a malevolent alien race, intent on engulfing the commonwealth of Human Worlds.

Helly and his companions attempt to capture a crucial witness to the Galapharma conspiracy, who has taken refuge on a hostile planet. Its insanely ambitious boss, Alistair Drummond, will stop at nothing in his quest for power, and Helly is marked for death as the two corporations continue to do battle.

Meanwhile, the Haluk follow their own appalling agenda, using human science to mutate their bodies, allowing them to infiltrate human society. Helly must find a way to alert the Human Commonwealth to the Haluk peril, while also saving his family from Drummond's increasingly desperate efforts to annhilate the Rampart worlds.

'You have to admire the scope of her work'
SFX

'A writer of exceptional perception and power'
Jean Auel, author of The Clan of the Cave Bear

Julian May's first story, the sf classic Dune Roller, was published in the early 1950s. She then wrote non-fiction and children's books for many years before bursting onto the fantasy scene with the phenomenally successful Saga of the Pliocene Exile . Recent works include Magnificat, the finale to The Galactic Milieu series, and Sky Trillium. Prolific, thoughtful and ever imaginative, her novels have been published to wide acclaim around the world.

GOR006995466
9780007379255
0007379250
Orion Arm: The Rampart Worlds: Book 2 by Julian May
Julian May
Used - Very Good
Paperback
HarperCollins Publishers
20100507
400
N/A
Book picture is for illustrative purposes only, actual binding, cover or edition may vary.
This is a used book - there is no escaping the fact it has been read by someone else and it will show signs of wear and previous use. Overall we expect it to be in very good condition, but if you are not entirely satisfied please get in touch with us
Trustpilot