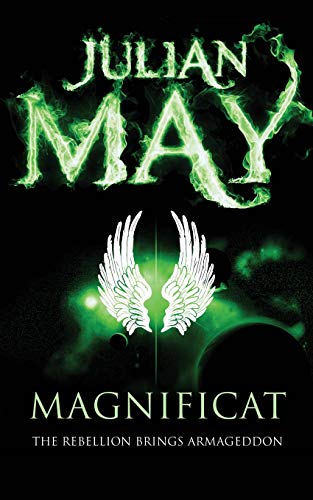 Magnificat by Julian May

A glorious future is in sight, until the rebellion brings Armageddon.

Magnificat by Julian May

Humanity is enjoying the Galactic Milieu. Colonies are thriving, Earth is peaceful, and as more metapsychics are born, the goal of mental Unity with the Milieu seems close.

But a rebel group want Earth to remain separate, led by a man obsessed with human superiority. This is Marc Remillard, unknowingly influenced by Fury who is now unveiled and on the run. Marc's goal is nothing less than the elevation of human metapsychics above all others, through artificial enhancement of mental faculties. His methods are unpalatable; his goal horrific. So Marc and his co-conspirators continue their work in secret.

Only the very Unity he fears can derail Marc's plans. And only his brother Jack the Bodiless, and the young woman known as Diamond Mask can attempt the impossible: destroy Marc, Unify humanity and allow the golden age of the Galactic Milieu to begin.

'Fascinating . . . May has cemented her position as one of this generation's foremost storytellers' Library Journal, 'A certain crowd-pleaser' Kirkus Reviews

Born in 1931, Julian May sold her first short story to John W. Campbell's Astounding magazine in 1951. But she didn't return to genre fiction until the 1980s. May then wrote the phenomenally successful Saga of the Exiles, followed by the Galactic Milieu series. The Many-Coloured Land won the Locus Best Novel Award and was shortlisted for numerous other high-profile genre awards.
GOR011039604
9781447224075
1447224078
Magnificat by Julian May
Julian May
The Galactic Milieu series
Used - Like New
Paperback
Pan Macmillan
2013-02-14
576
N/A
Book picture is for illustrative purposes only, actual binding, cover or edition may vary.
The book has been read, but looks new. The book cover has no visible wear, and the dust jacket is included if applicable. No missing or damaged pages, no tears, possible very minimal creasing, no underlining or highlighting of text, and no writing in the margins
Trustpilot