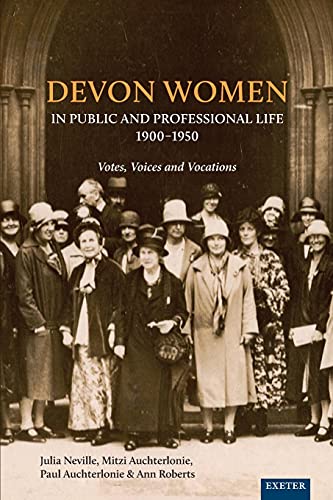 Devon Women in Public and Professional Life, 1900-1950 by Julia Neville

This book is one of the first to study the role of women in public and professional life from a regional point of view. It breaks new ground in considerations of gender in the early twentieth century and the history of Devon in the modern period.

This book is one of the first to study the regional role of women in public and professional life, breaking new ground in early twentieth-century local and gender history.

Covering politics (Eleanor Acland and Clara Daymond), medicine and education (Dr Mabel Ramsay and Jessie Headridge), and a variety of voluntary organizations (Florence Cecil, Georgiana Buller, Jane Clinton and Sylvia Calmady-Hamlyn), it shows how women worked individually and in collaboration to create new opportunities for women and girls in a large, mainly rural, county far from London and the industrial heartlands of England. These biographical studies are based on original research and reveal the huge public contribution made by these eight women, who up to now have been largely hidden from history.

Devon Women in Public and Professional Life, 1900-1950 is a contribution to the history of women in Britain between the wars, a period that has received less attention than the Edwardian era and the two World Wars. It also fills a major gap in the history of Devon women, on which almost nothing has been published, and on Devon in the inter-war period, similarly neglected by historians. It will be of interest to academics and students in the fields of gender history and the history of modern Britain, as well as everyone interested in the history of twentieth-century Devon.

Julia Neville is an Honorary Research Fellow at Exeter University interested in twentieth-century social change. Formerly an NHS manager, she now supports community history projects. Recent work and publications include Early Victorian Schools and Devon Suffrage Activists. She is Project Manager for a research collaboration on Devon in the 1920s.

Mitzi Auchterlonie worked for Exeter University's Department of Lifelong Learning as a Teaching Fellow and Online Tutor in History until 2016. She has written Conservative Suffragists: The Women's Vote and the Tory Party (2007) and co-authored the International Encyclopedia of Women's Suffrage (2000). She is currently Book Review Editor of The Devon Historian.

Before retiring in 2011, Paul Auchterlonie was Librarian for Middle Eastern and Islamic Studies at the University of Exeter. He is the author of Encountering Islam: Joseph Pitts of Exeter, an English Slave in 17th-Century Algiers and Mecca. From 2013 to 2019 he was Programme Secretary for Devon History Society.

Ann Roberts has held senior management roles in the Utilities sector and the NHS. She obtained a BA(Hons) in Historical Studies by part time study from the University of Exeter in 2008. After taking early retirement she obtained a MRes with Distinction from Plymouth University in 2014. She has served on the Council of the Devon History Society and set up and chaired a local history society which has carried out a number of research projects over the last nine years. Her personal research interests include the development of social housing, and women's history during the nineteenth and twentieth centuries.

Helen Turnbull is a retired legal clerk. She was Archivist to Lord Clifford of Chudleigh for ten years and from 2010 to 2012 was Secretary of Devon History Society.

Appendix: Voluntary Organizations in Devon Supported by the Subjects of these Biographies

NLS9781905816774
9781905816774
1905816774
Devon Women in Public and Professional Life, 1900-1950: Votes, Voices and Vocations by Julia Neville
Julia Neville
New
Paperback
University of Exeter Press
20210914
320
N/A
Book picture is for illustrative purposes only, actual binding, cover or edition may vary.
This is a new book - be the first to read this copy. With untouched pages and a perfect binding, your brand new copy is ready to be opened for the first time
Trustpilot