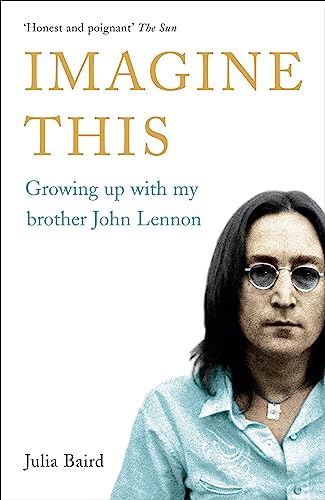 Imagine This by Julia Baird

Imagine This by Julia Baird

'Honest and poignant' THE SUN

Through her own personal journey, Julia reveals the battle between two strong, self-willed women - John's mother and his Aunt Mimi - to have custody of John in his early years. It was Aunt Mimi who finally won and removed John from his mother at the age of five. But as John grew up, he would frequently return home - spending time with his mother and half-sisters, Julia, Jackie and Ingrid, learning his love of music from his mother, and hanging out, playing guitar with his childhood friend Paul McCartney.

Julia is candid about the sadness as well as the joy of their broken family life. She details the devestating loss of their mother Julia in a road accident - and describes the painful legacy for the entire family, especially John as he moves into a life of stratospheric fame with the Beatles.

'A tragic story . . . also a tenderly evoked memoir of a Liverpool childhood' * The Independent *
'Honest and poignant, this enjoyable read offers fans a new perspective on their idol' * The Sun *
'A moving account of the Beatle's childhood by his half-sister . . . fascinating' * Observer Music Monthly *
'Philip Larkin's much-quoted lines about sex being invented in 1963 "between the end of the Chatterley ban/ And the Beatles first LP" stand corrected here. Perhaps life was dull in Hull and Coventry, but on this account there was plenty of passion in Liverpool' * The Irish Times *
'A poignant powerful tale that throws new light on the Lennon legend' * The Scottish Sunday Post *
'An unusual treat' * Aberdeen Evening Express *
'His sister's important new account chronicles the pivotal childhood years that provided the source of both Lennon's rich creativity and personal vulnerability' * Good Books Guide *
Julia Baird has an MA in Philosophy of Education and first worked as a teacher of French and English before going on to work as a special needs teacher for 15 years with excluded adolescents in the most deprived areas of Chester. She has three children and is now a director of Cavern City Tours. She has written one previous book, JOHN LENNON: MY BROTHER, now out of print.
GOR001654441
9780340839256
0340839252
Imagine This by Julia Baird
Julia Baird
Used - Very Good
Paperback
Hodder & Stoughton General Division
2008-01-24
352
N/A
Book picture is for illustrative purposes only, actual binding, cover or edition may vary.
This is a used book - there is no escaping the fact it has been read by someone else and it will show signs of wear and previous use. Overall we expect it to be in very good condition, but if you are not entirely satisfied please get in touch with us
Trustpilot