20,000 Leagues Under The Sea Jules Verne 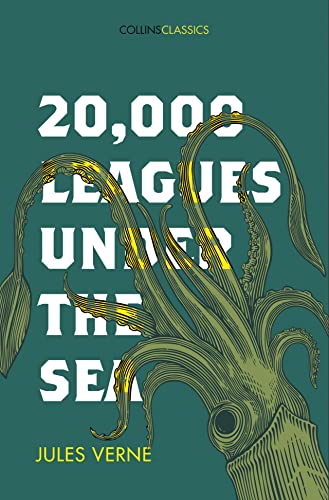 20,000 Leagues Under The Sea (Collins Classics) by Jules Verne

'The creature's teeth were buried in the gunwale, and it lifted the whole thing out of the water like a lion can a roebuck...'

Scientist Pierre Aronnax, together with his faithful servant Conseil and the whaler Ned Land, is invited to join a hazardous voyage to the Pacific Ocean to hunt down a terrifying sea monster. But on attacking it, they discover that it is in fact an enormous submarine in disguise, commanded by the mysterious Captain Nemo. Nemo takes them on board to join his crew, and their ensuing quests, explorations and misfortunes are among the greatest adventure stories ever told.

First published in 1871 to critical acclaim, 20,000 Leagues Under the Sea is regarded as one of Jules Verne's finest works and a classic of the science fiction genre. It has been adapted
into numerous films, television series, comic books and graphic novels.

Jules Verne helped pioneer the science-fiction genre. His oeuvre provided commentary on the effects of modernity and industrialisation. Verne wrote about space, air, and underwater travel before any transportation vehicles existed that could cross such territories. He is often referred to the as the 'Father of science fiction', along with H. G. Wells.
GOR008569928
9780008195526
0008195528
20,000 Leagues Under The Sea (Collins Classics) by Jules Verne
Jules Verne
Collins Classics
Used - Very Good
Paperback
HarperCollins Publishers
2017-05-18
352
N/A
Book picture is for illustrative purposes only, actual binding, cover or edition may vary.
This is a used book - there is no escaping the fact it has been read by someone else and it will show signs of wear and previous use. Overall we expect it to be in very good condition, but if you are not entirely satisfied please get in touch with us
Trustpilot