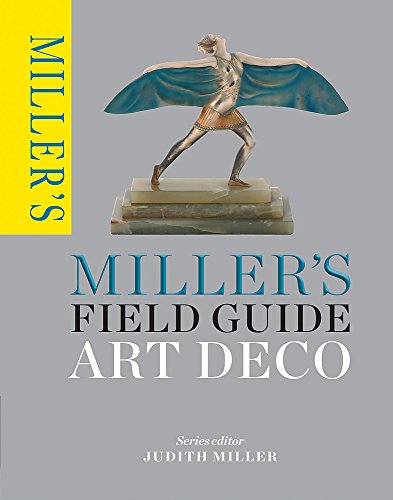 The antique-buyer's guide to Art Deco in a compact pocket format.

Miller's Field Guides are an invaluable resource for collectors when out buying items at antiques shops, auctions or car boot fairs. They provide a fast and accurate way to recognize, identify and date antiques. In each book a simple question-and-answer checklist is provided for a wide range of key items, teaching you what to look for as well how to spot a fake or a copy. There are price codes throughout, plus concise information on makers, factories, identifying marks and the factors that affect the value of the piece.

Full of expertise * The Times *

Judith Miller began collecting in the 1960s while a student at Edinburgh University in Scotland. She has since extended and reinforced her knowledge of antiques through international research, becoming one of the world's leading experts in the field. In 1979 she co-founded the international best-seller Miller's Antiques Price Guide and has since written more than 100 books which are held in high regard by collectors and dealers.

Judith Miller appears regularly on TV and radio. She is a specialist on the BBC's Antiques Roadshow and has co-hosted the popular BBC series The House Detectives, ITV's Antiques Trail, and Discovery's It's Your Bid. She has appeared on The Martha Stewart Show and CNN. She is a regular lecturer and contributor to numerous newspapers and magazines, including the Financial Times, the Daily Telegraph, BBC Homes & Antiques and House & Garden. She has lectured extensively, including at the V&A in London and the Smithsonian in Washington.

Eric Knowles is a well-known face in the world of antiques, particularly to viewers of the BBC's Antiques Roadshow. He joined Bonhams, the London auctioneers, in 1976, working first as a porter in the ceramics' department, before being offered full directorship in 1985. In 2009, Eric became independent of Bonhams and has since offered his own valuation service. He is a consultant with Dreweatts & Bloomsbury Auctions in Bristol.

Eric is presently to be seen on BBC2's popular programme Put Your Money Where Your Mouth Is and alongside Sandi Toksvig on Antiques Master. Other appearances include The Great Antiques Hunt and The Antique Inspectors. Eric is also the resident Sunday Times Antiques Expert and remains a frequent contributor to the BBC Homes and Antiques magazine and ARC online magazine and has written several articles for the Sunday Times newspaper.

GOR006457323
9781845339500
1845339509
Miller's Field Guide: Art Deco by Judith Miller
Judith Miller
Miller's Field Guides
Used - Very Good
Paperback
Octopus Publishing Group
2014-10-06
240
N/A
Book picture is for illustrative purposes only, actual binding, cover or edition may vary.
This is a used book - there is no escaping the fact it has been read by someone else and it will show signs of wear and previous use. Overall we expect it to be in very good condition, but if you are not entirely satisfied please get in touch with us
Trustpilot