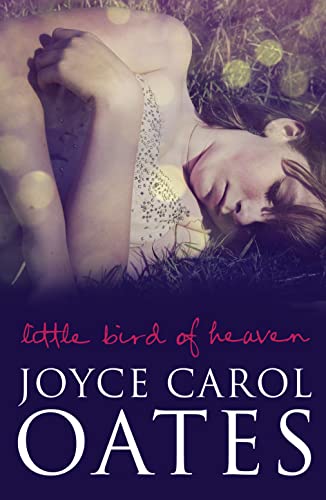 `A writer of extraordinary strengths' Guardian

`A writer of extraordinary strengths' Guardian

When a young wife and mother named Zoe Kruller is found brutally murdered, the Sparta police target two primary suspects: her estranged husband Delray and her longtime lover Eddy Diehl. In turn, the Krullers's son Aaron and Eddy's daughter Krista become obsessed with one another, each believing the other's father is guilty.

Told in halves in the very different voices of Krista and Aaron, Little Bird of Heaven is classic Joyce Carol Oates, in which the lyricism of intense sexual love is intertwined with the anguish of loss, and tenderness is barely distinguishable from cruelty. By the novel's end, the fated lovers, meeting again as adults, are at last ready to exorcise the ghosts of the past and come to terms with their legacy of guilt, misplaced love and redemptive yearning.

With Little Bird of Heaven, Joyce Carol Oates once again confirms her place as one of the most outstanding writers at work today.

`The book is suffused with the grey, ambient unease in which Oates specialises; she's one of our creepiest writers, a kind of feminist Poe with a working-class sensibility' Guardian

`Another step in Oates's progress towards the title of Great American Novelist.' Independent

`There are...glimpses of brilliance, and Oates is sympathetic to the animals we all, at times, become' Daily Mail

`An absorbing study of lust, trust, and an unsolved murder, Oates's gritty new mystery explores the attraction between the son of the victim and daughter of the accused' Good Housekeeping

`Her prose is peerless and her ability to make you think as she re-invents genres is unique. Few writers move so effortlessly from the gothic tale to the psychological thriller to the epic family saga to the lyrical novella. Even fewer authors can so compellingly and entertainingly tell a story.' Jackie McGlone, Scotland on Sunday

Joyce Carol Oates is a recipient of the National Book Award and the PEN/Malamud Award for Excellence in Short Fiction. She has written some of the most enduring fiction of our time, including `We Were the Mulvaneys', which was an Oprah Book Club Choice, and `Blonde', which was nominated for the National Book Award. She is the Roger S. Berlind Distinguished Professor of Humanities at Princeton University.

GOR002315067
9780007342549
0007342543
Little Bird of Heaven by Joyce Carol Oates
Joyce Carol Oates
Used - Very Good
Paperback
HarperCollins Publishers
2010-09-02
448
Short-listed for International IMPAC Dublin Literary Award 2011
Book picture is for illustrative purposes only, actual binding, cover or edition may vary.
This is a used book - there is no escaping the fact it has been read by someone else and it will show signs of wear and previous use. Overall we expect it to be in very good condition, but if you are not entirely satisfied please get in touch with us
Trustpilot