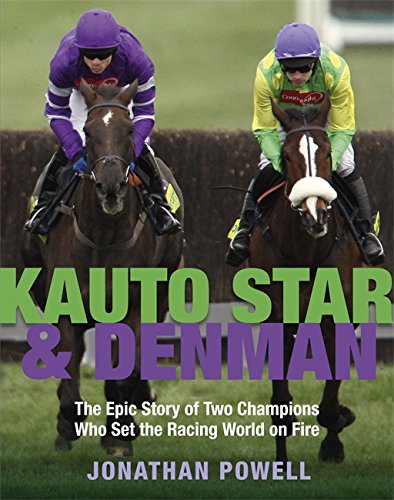 The continuing rivalry between Kauto Star and Denman, stablemates at home but deadly enemies on the course, has electrified the nation.

The continuing rivalry between Kauto Star and Denman, stablemates at home but deadly enemies on the course, has electrified the nation.

Kauto Star and Denman, both superstars, have between them changed the landscape of jump racing forever. Stablemates side-by-side at the Somerset yard of their trainer Paul Nicholls, they are exactly the same age but hugely different personalities.

Kauto Star, a handsome bay was born in France where he was dubbed 'L'Extraterrestre', has won the King George VI chase at Kempton Park on four consecutive occassions, matching Desert Orchid's record, and the Cheltenham Gold Cup twice. Some say he is the leading steeplechaser of all time.

Denman, an indomitable Irish Chestnut, ruthlessly effecient and blessed with great stamina, is known as 'The Tank'. In 2008 he knocked Kauto Star into second place in the Cheltenham Gold Cup, a result reversed the next year. As well as Cheltenham, he has won the Hennessy Gold Cup twice.

Not since the days of Arkle has any horse attracted such attention from outside racing. The continuing rivalry between Kauto Star and Denman has captured the imagination of millions and has been compared to the classic sporting contests of Borg against McEnroe, Ali against Foreman and Coe against Ovett. This is the story of their life and times and the drama of their many victories - and occassional spectacular failures.

Jonathan Powell is the only senior member of staff to remain at Tony Blair's side from beginning (1994) to end (June 2007) as his Chief of Staff.
Jonathan Powell is a journalist and broadcaster, for twenty-three years a member of the BBC's racing team and now the racing correspondent fo the Mail on Sunday. He has written numerous books on horseracing including Paul nicholls' autobiograpghy Lucky Break, Chmapion's Storywith the jockey Bob Champion, which was made into a film starring John Hurt, and books on Frankie Dettori and Desert orchid. he co-wrote David Nicholson's autobiography The Duke, and interviewed jokey John Francome on the DVD In Coversation with John Francome. In 1981 he was voted Journalist of the Year by teh Horserace Writers and Photographers Association.

GOR002254312
9780297863120
0297863126
Kauto Star & Denman by Jonathan Powell
Jonathan Powell
Used - Very Good
Hardback
Orion Publishing Co
2010-08-26
192
N/A
Book picture is for illustrative purposes only, actual binding, cover or edition may vary.
This is a used book - there is no escaping the fact it has been read by someone else and it will show signs of wear and previous use. Overall we expect it to be in very good condition, but if you are not entirely satisfied please get in touch with us
Trustpilot