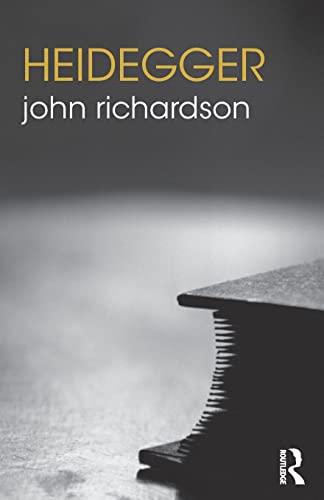 Presents an introduction to Heidegger's life and work. This book introduces and assesses the key arguments of Being and Time under three key headings: pragmatism; existentialism; and the themes of time and being.

Martin Heidegger is one of the twentieth century's most influential, but also most cryptic and controversial philosophers. His early fusion of phenomenology with existentialism inspired Sartre and many others, and his later critique of modern rationality inspired Derrida and still others. This introduction covers the whole of Heidegger's thought and is ideal for anyone coming to his work for the first time.

John Richardson centres his account on Heidegger's persistent effort to change the very kind of understanding or truth we seek. Beginning with an overview of Heidegger's life and work, he sketches the development of Heidegger's thought up to the publication of Being and Time. He shows how that book takes up Husserl's method of phenomenology and adapts it. He then introduces and assesses the key arguments of Being and Time under three headings-pragmatism, existentialism, and temporality-its three levels of analysis of human experience.

Subsequent chapters introduce Heidegger's later philosophy, including his turn towards a historical account of being, and new ideas about how we need to 'think' to get the truth about it; his influential writings on language, art, and poetry, and their role in the Western history of being; and his claim that this history has culminated in a technological relation to things that is deeply problematic, above all in the way it excludes the divine. The final chapter looks at Heidegger's profound influence on several intellectual movements ranging from phenomenology to existentialism to postmodernism.

A much-needed and refreshing introduction to this major figure, Heidegger is ideal reading for anyone coming to his work for the first time and will interest and stimulate students and scholars alike.

This brilliant book should convince mainstream philosophers that Heidegger is a thinker they cannot ignore or dismiss. Stunningly clear, it serves up existential insights on a silver platter. - Iain Thomson, University of New Mexico, USA

Equally remarkable for its erudition and clarity, this book will prove invaluable for students and scholars looking for guidance through Heidegger's early and later thought. Richardson's discussion of Being and Time is particularly ingenious, showing how it progresses through the increasingly profound layers of pragmatism, existentialism, and temporality. I highly recommend it. - Lee Braver, Hiram College, USA

Here's a book on Heidegger that instructs the uninitiated, meets Heidegger's opponents with rigor and fairness, and does all this with commendable clarity and thoroughness. - Albert Borgmann, University of Montana, USA

John Richardson is Professor of Philosophy at New York University, USA. His books include Existential Epistemology: A Heideggerian Critique of the Cartesian Project (1986), Nietzsche's System (1996), and Nietzsche's New Darwinism (2004). He is co-editor (with Brian Leiter) of Nietzsche (2001).

NGR9780415350716
9780415350716
0415350719
Heidegger by John Richardson
John Richardson
The Routledge Philosophers
New
Paperback
Taylor & Francis Ltd
20120223
408
N/A
Book picture is for illustrative purposes only, actual binding, cover or edition may vary.
This is a new book - be the first to read this copy. With untouched pages and a perfect binding, your brand new copy is ready to be opened for the first time
Trustpilot