Sociology and the Demystification of the Modern World John Rex 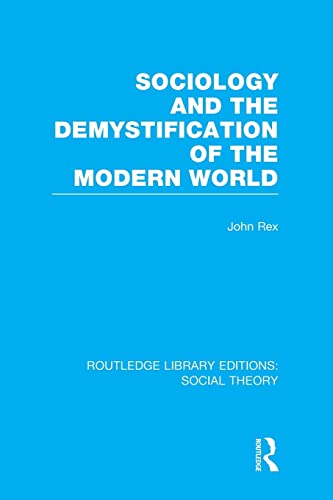 Sociology and the Demystification of the Modern World by John Rex

Sociology and the Demystification of the Modern World by John Rex

Professor Rex's controversial book concerns not only those who are professional sociologists but all thinking people who live in the modern world. One of the objects of sociology is to give 'power to the people', to make a contribution to the understanding of political problems. Rex writes from a deep conviction that sociology is a subject whose insights should be made available to the great mass of the people, so that they may liberate themselves from the mystification of social reality that is continually and routinely presented to them through the media, by those who exercise power and by those who have influence.

The book is dedicated to St Augustine and Franz Fanon, both of whom, Rex points out, were conscious of living in an age which was embarking on a new barbarism, but had the courage to use their intellects to help understand the possibility of a better future. Rex continues in this tradition, and his main preoccupations are reflected in the present book. It includes a discussion of the problem of social knowledge, an analysis of the basic problems of theory building, and, with the aid of concepts derived from Max Weber, an attempt to understand the major problems of the first, second and third worlds. The author also looks at social structures and moral perspectives, and discusses the vocation of a sociologist in a collapsing civilisation. The book is certain to stimulate debate, both in sociological and political fields and more generally, and is also a serious contribution to the discussion of the methodology and purposes of sociology.

Part 1. The Problem of Social Knowledge 1. Sociology, Demystification and Common Sense 2. The Givens of Sociological Analysis 3. Actors' Theories and Sociologists' Constructs 4. Ideal Types, Structure and Quantitative Aspects of Sociology Part 2. Basic Problems of Theory Building 5. Social Structures, the Building Blocks of History 6. Some Major Problems of Social Structure 7. Structures, System and Conflict Part 3. First, Second and Third Worlds 8. The Western Capitalist Complex: Corporations and Classes 9. The Western Capitalist Complex: the Engineering of Consent 10. The Second World: Central Economic Planning and Political Mobilisation 11. The Third World and the Institutions of Colonialism Part 4. Social Structures and Moral Perspectives 12. The Moral Disintegration of the Enlightened World 13. The Revolution of the Third World and the New Dark Ages 14. Public Issues and Private Troubles 15. The Vocation of a Sociologist in a Collapsing Civilisation 16. Some Utopian Perspectives for a Distant Future

NLS9781138996373
9781138996373
1138996378
Sociology and the Demystification of the Modern World by John Rex
John Rex
Routledge Library Editions: Social Theory
New
Paperback
Taylor & Francis Ltd
2015-12-21
282
N/A
Book picture is for illustrative purposes only, actual binding, cover or edition may vary.
This is a new book - be the first to read this copy. With untouched pages and a perfect binding, your brand new copy is ready to be opened for the first time
Trustpilot