The Origins of Capitalism as a Social System John Milios (National Technical University of Athens, Greece) 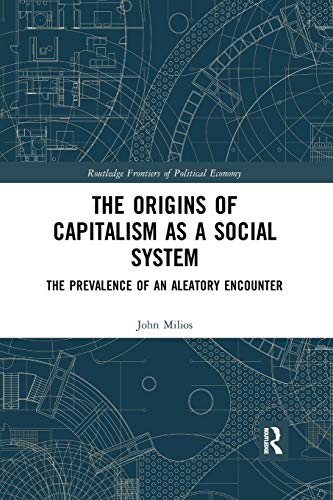 The Origins of Capitalism as a Social System by John Milios (National Technical University of Athens, Greece)

The Origins of Capitalism as a Social System: The Prevalence of an Aleatory Encounter by John Milios (National Technical University of Athens, Greece)

The Origins of Capitalism as a Social System explores the line between what is and is not capitalism, (re)producing a theory of capitalism as a system of class domination and exploitation. Part I of the book focuses on the monetary theory of value and capital developed by Karl Marx, while at the same time critically reviews an array of economic and historical literature, both Marxist and non-Marxist. Following this, Part II expounds the first emergence of capitalism in Venice. It highlights the historical contingencies that made capitalism in the Venetian society possible, as well as the structural elements of the capitalist system and their interconnectedness. Finally, Part III discusses the capitalist character of the Venetian social formation from the end of the fourteenth century until the fall of the republic to Napoleon in 1797. As part of this, the author investigates the significance of forms of governmentality beyond national cohesion and territorialization.

Of great interest to economists, historians and both undergraduate and postgraduate students, this book gives special emphasis to a critical evaluation of the tensions and controversies between historians, economists and other social scientists with regard to the character and role that money and trade played in societies and economies.

"In this grand style reconstruction of the genesis of capitalism, Milios brings together Marx, Braudel, Weber, Lenin, and his own analysis of 'money-begetting' modes of production, under the aegis of the Althusserian 'aleatory encounter' of social forces. In a path-breaking concrete analysis, he invents the Venetian Paradigm of decalage between financialization and proletarianization. It is impressive, convincing, and surprisingly actual.", Etienne Balibar, co-author of Reading Capital

"The publication of this book is a rather significant moment in the history of reflections on capitalism, and moreover a turning point in the history of the transformative present. Raising yet once again the question of what capitalism as a system actually is, John Milios reassembles his subject of study, traversing centuries and places in history so as to identify and discern heterogeneous practices being objectivised - or not - in the name of capitalism, ultimately establishing a genealogy of a 'capitalist state, beyond national territorialisation'. This book, or shall we dare say this 'machine-book', offers the bizarre completeness one might feel when reading an important book: full and empty at the same time.", Marios Emmanouilidis, Independent researcher

"A fascinating book that provides us with an exciting new perspective on the origins of capitalism. John Milios asks more precisely than usual what distinguishes capitalism as a social system from precapitalist societies. Taking seriously that the origin of capitalism is a singular process, he avoids any deterministic approach to analyzing history. The - historically surprising - ascent of Venice as a leading commercial and colonial power during the 13th and 14th centuries, with its rather special form of original accumulation towards the end of the 14th century, is demonstrated to be a capitalist social formation which practically introduced capitalism to Western Europe. This book really provides us with a fundamental and exciting new turn in the long-lasting discussion about the origins of capitalism.", Michael Heinrich, Author of An Introduction to the three Volumes of Karl Marx's Capital.

John Milios is Professor of Political Economy and the History of Economic Thought at the National Technical University of Athens (NTUA), Greece. He is also Director of the quarterly journal of economic and political theory, Theseis (published since 1982 in Greek).

Acknowledgements, Introduction, Part I Capitalism and its origins: the theoretical context, 1 Marx's notion of capitalism: a synoptic account, 2 Marx's two approaches to the genesis of capitalism: the 'productive forces - relations of production dialectic' vs. 'so-called original accumulation', 3 Early forms of capitalism and wage labour: Lenin's polemic against the Narodniks, 4 Capitalism and the agrarian sector: Karl Kautsky's theoretical intervention, 5 Post-Second World War Marxist approaches to the 'transition to capitalism' question, 6 Non-Marxist approaches to the origins of capitalism, 7 Modes of production and the pre-capitalist money-owner, Part II Venice and the Mediterranean: a discourse on the birth of capitalism, 8 From a Byzantine exarchate to a major colonial power in the Mediterranean: a historical sketch of the rise of Venice up to 1204, 9 The Venetian social formation until the end of the thirteenth century: an unconsummated process of original accumulation, 10 War economics and the ascent of capitalism in the fourteenth century, Part I After the encounter took hold: the reproduction of capitalism on an expanded scale, 11 Venice alongside the new capitalist powers, 12 Political power and social cohesion, Bibliography, Index

NLS9780367894672
9780367894672
036789467X
The Origins of Capitalism as a Social System: The Prevalence of an Aleatory Encounter by John Milios (National Technical University of Athens, Greece)
John Milios (National Technical University of Athens, Greece)
Routledge Frontiers of Political Economy
New
Paperback
Taylor & Francis Ltd
2019-12-06
242
N/A
Book picture is for illustrative purposes only, actual binding, cover or edition may vary.
This is a new book - be the first to read this copy. With untouched pages and a perfect binding, your brand new copy is ready to be opened for the first time
Trustpilot