The Cheviot, the Stag and the Black, Black Oil John McGrath 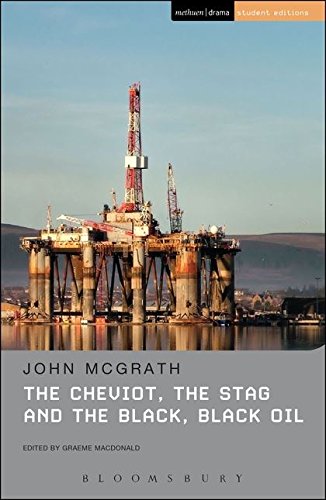 The Cheviot, the Stag and the Black, Black Oil by John McGrath

The Cheviot, the Stag and the Black, Black Oil by John McGrath

Written during the 1970s, John McGrath's winding, furious, innovative play tracks the economic history and exploitation of the Scottish Highlands from the post-Rebellion suppression of the clans to the story of the Clearances: in the nineteenth century, aristocratic landowners discovered the profitability of sheep farming, and forced a mass emigration of rural Highlanders, burning their houses in order to make way for the Cheviot sheep. The play follows the thread of capitalist and repressive exploitation through the estates of the stag-hunting landed gentry, to the 1970s rush for profit in the name of North Sea Oil. Described by the playwright as having a "ceilidh" format, The Cheviot, the Stag and the Black, Black Oil draws on historical research alongside Gaelic song and the Scots' love of variety and popular entertainment to tell this epic story. A totally distinctive cultural and theatrical phenomenon, the play championed several new approaches to theatre, raising its profile as a means of political intervention; proposing a collective, democratic, collaborative approach to creating theatre; offering a language of performance accessible to working-class people; producing theatre in non-purpose-built theatre spaces; breaking down the barrier between audience and performers through interaction; and taking theatre to people who otherwise would not access it. The play received its premiere in 1973 by the agit-prop theatre group 7:84, of which John McGrath was founder and Artistic Director, and toured Scotland to great critical and audience acclaim.
[McGrath] was Britain's Brecht, Scotland's Dario Fo . . . A creative powerhouse who was often out of fashion, but never out of action . . . Today, few speak, far less make theatre, with such ideological intent. * Guardian *
The late John McGrath's hugely important fusion of Highland ceilidh and old-fashioned Scots musical theatre . . . still remains alive and contemporary. As play it has everything, and it throws it at you in generous handfuls; laughter, farce, drama, live song and dance, finely researched political intent. . . . as a love song to a beautiful, damaged culture and a warning of the dangers of unchecked capitalism it still rings astonishingly true. * Independent *
arguably the single most important show in the whole history of Scottish theatre: important not only because of its angry, hilarious, brilliantly-researched political content, still almost frighteningly relevant today, but because its ceilidh form, and its passionate commitment to touring to communities large and small, galvanised an irreversible change in what Scotland thought theatre was, what it could do, and who its audience might be. . . . John McGrath's great play will reach out to a new generation, and continue to evolve, develop, and live, along with the story of Scotland itself. * Scotsman *
John McGrath was born in Birkenhead, Cheshire, in 1935. After national service and Oxford University, he wrote and directed for theatre and television, as well as writing for cinema. Early work included Z-Cars for BBC-TV (1962), Events While Guarding the Bofors Gun (1966) and the screenplay for Billion Dollar Brain (1976). In 1971, together with Elizabeth MacLennan, he co-founded the 7:84 Theatre Company, which divided into Scottish and English companies in 1973 with McGrath remaining as Artistic Director of both. During his career McGrath wrote over 60 plays, including Fish in the Sea (1972), The Cheviot, the Stag and the Black, Black Oil (1973), Blood Red Roses (1980), Border Warfare (1989), Watching for Dolphins (1992) and, most recently, HyperLynx (2001). He was twice Visiting Fellow in Theatre at Cambridge University. His previous books include A Good Night Out (1981), The Bone Won't Break (1990) and Six Pack: Plays for Scotland (1996). McGrath founded Freeway Films in 1982, for which he produced, amongst others, The Dressmaker (1985), Carrington (1995), Ma Vie en Rose (1997) and Aberdeen (2002). He also founded Moonstone International Screen Labs to support and promote independent European filmmaking. He received Lifetime Achievement Awards from both BAFTA (in 1993) and the Writers' Guild of Great Britain (in 1997), as well as Honorary Doctorates from the University of Stirling and the University of London. He died in 2002. Graeme Macdonald (editor) is Associate Professor in the Department of English and Comparative Literary Studies at the University of Warwick, UK, where he teaches modern and contemporary literature and drama. He has authored various articles and essays on 19-21C literature and culture, and is editor of Post-Theory: New Directions in Criticism (1999) and Scottish Literature and Postcolonial Literature (2011).
John McGrath: Politics, Aesthetics and Biography; Plot; Commentary; Context: McGrath's Theatre for Community; Influences: from Brecht to Music Hall; Theatre Without Walls: 7:84 to NTS; The Cheviot as a "World" Play; Issues: Land, Development and the Highlands; Imperialism, Nationalism and "Devolutionary-Britain"; Language and Clearance: Peripheralising Culture; The Cheviot: From Peasant to Petro-Drama; Structure; The Ceilidh as Dramatic Form: Reeling and Repetition; Comedy, Pantomime and Political Satire ; Production and Audience; "Live" History: Chronology and Capitalist; Modernity; Conclusion: A Play for Today?; References; Further Reading; The Cheviot, the Stag and the Black, Black Oil; Notes; Questions for Further Study.
GOR006554593
9781472531094
1472531094
The Cheviot, the Stag and the Black, Black Oil by John McGrath
John McGrath
Student Editions
Used - Very Good
Paperback
Bloomsbury Publishing PLC
2015-02-26
216
N/A
Book picture is for illustrative purposes only, actual binding, cover or edition may vary.
This is a used book - there is no escaping the fact it has been read by someone else and it will show signs of wear and previous use. Overall we expect it to be in very good condition, but if you are not entirely satisfied please get in touch with us
Trustpilot