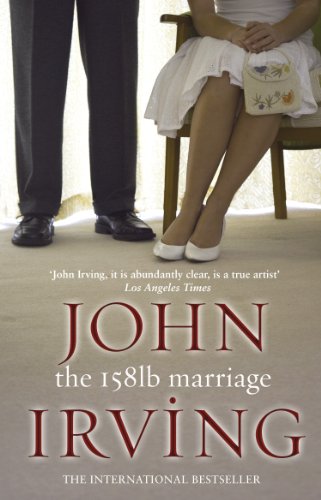 The 158-Pound Marriage by John Irving

On a New England campus, Viennese housewife Utchka and her aspiring writer husband live a rather placid life with their two children.Until, that is, they meet Severin Winter, Professor of German and wrestling coach, and his delicate wife Edith at a faculty party.

The 158-Pound Marriage by John Irving

On a New England campus, Viennese housewife Utchka and her aspiring writer husband live a rather placid life with their two children.Until, that is, they meet Severin Winter, Professor of German and wrestling coach, and his delicate wife Edith at a faculty party. Utchka and Severin are rather taken with one another, and, conveniently, their spouses appear to be similarly smitten.A bizarre menage a quatre is the result of these convoluted desires, and what starts out as a bit of fun is soon subject to the darker machinations of obsession,..

The most important American humorist to appear in the last ten years -- Kurt Vonnegut
Irving's popularity is not hard to understand. His world really is the world according to everyone * Time *
John Irving has been compared with Kurt Vonnegut and J.D.Salinger, but is arguably more inventive than either. Wry, laconic, he sketches his characters with an economy that springs from a feeling for words and mastery over his craft. This superbly original book is one to be read and remembered * The Times *

John Irving was born in Exeter, New Hampshire, in 1942, and he once admitted that he was a 'grim' child. Although he excelled in English at school and knew by the time he graduated that he wanted to write novels, it was not until he met a young Southern novelist named John Yount, at the University of New Hampshire, that he received encouragement. 'It was so simple,' he remembers. 'Yount was the first person to point out that anything I did except writing was going to be vaguely unsatisfying.'

In 1963, Irving enrolled at the Institute of European Studies in Vienna, and he later worked as a university lecturer. His first novel, Setting Free the Bears, about a plot to release all the animals from the Vienna Zoo, was followed by The Water-Method Man, a comic tale of a man with a urinary complaint, and The 158-Pound Marriage, which exposes the complications of spouse-swapping. Irving achieved international recognition with The World According to Garp, which he hoped would 'cause a few smiles among the tough-minded and break a few softer hearts'.

The Hotel New Hampshire is a startlingly original family saga, and The Cider House Rules is the story of Doctor Wilbur Larch - saint, obstetrician, founder of an orphanage, ether addict and abortionist - and of his favourite orphan, Homer Wells, who is never adopted. A Prayer for Owen Meany features the most unforgettable character Irving has yet created. A Son of the Circus is an extraordinary evocation of modern day India. He is also the author of the international bestsellers A Widow for One Year, The Fourth Hand and Until I Find You.

A collection of John Irving's shorter writing, Trying to Save Piggy Sneed, was published in 1993. Irving has also written the screenplays for The Cider House Rules and A Son of the Circus, and wrote about his experiences in the world of movies in his memoir My Movie Business.

Irving has had a life-long passion for wrestling, and he plays a wrestling referee in the film of The World According to Garp. In his memoir, The Imaginary Girlfriend, John Irving writes about his life as a wrestler, a novelist and as a wrestling coach. He now writes full-time, has three children and lives in Vermont and Toronto.

GOR000977730
9780552992084
0552992089
The 158-Pound Marriage by John Irving
John Irving
Used - Very Good
Paperback
Transworld Publishers Ltd
1980-02-22
256
N/A
Book picture is for illustrative purposes only, actual binding, cover or edition may vary.
This is a used book - there is no escaping the fact it has been read by someone else and it will show signs of wear and previous use. Overall we expect it to be in very good condition, but if you are not entirely satisfied please get in touch with us
Trustpilot