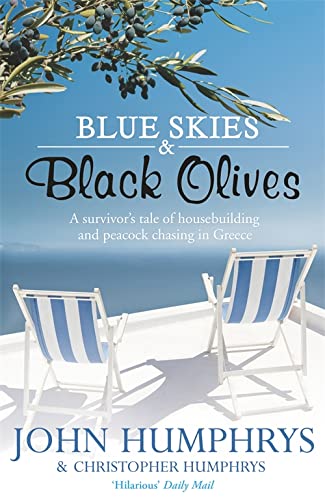 Radio 4 Today presenter and national treasure John Humphrys' funny and engaging memoir of building a home in Greece with his son Christopher.

'A profoundly instructive course in the idiosyncrasies of Greek law, custom and culture ... entertainingly chronicled' SAGA

From Radio 4 presenter, bestselling author and national treasure John Humphrys, a funny and engaging memoir of building a home in Greece written together with his son Christopher.

It was a moment of mad impulse when John Humphrys decided to buy a semi-derelict cottage and a building site on a plot of land overlooking the Aegean. A few minutes gazing out over the most glorious bay he had ever seen was all it took to persuade him. After all, his son Christopher was already raising his family there so he would help build the beautiful villa that would soon rise there. What could possibly go wrong?

John was to spend the next three years regretting his moment of madness.

Some of it had its comic side. He learned to cope with a drunken peacock falling out of his favourite tree and even a colony of rats invading his bedroom. Some of the humans proved trickier: the old man demanding payment for olive trees in the middle of John's own land; the neighbour who dragged his lovely old fishing boat onto the beach and set fire to it after a row with his wife. And, of course, the builders. Was the plumber who electrocuted him in the shower vengeful or merely incompetent?

John learned a lot about Greece in a short time. He grew to love it and loathe it in almost equal measures, but was never for a moment bored by it. And Christopher learned a bit more about John. Their shared experience revived keen memories for him of growing up with a father for whom patience was never the strongest virtue...

Here father and son capture the idyll and the odyssey as paradise is found, lost and regained.

a very funny tome * Daily Telegraph *
hilarious * Daily Mail *
a profoundly instructive course in the idiosyncrasies of Greek law, custom and culture...entertainingly chronicled * Saga *
A sparky, funny, exasperated story that brings Humphrys and his family together in trying but also tender circumstances. * Iain Finlayson, Times *
'John Humphrys was born to be combative... His cellist son Christopher acts as a gentle foil. Between them they amusingly blend the genres of misery memoir and Mediterranean escapist idyll * FT Weekend *
Entertaining * The Lady *
hilarious * Independent on Sunday *

John Humphrys has reported from all over the world for the BBC and presented its frontline news programmes on both radio and television, in a broadcasting career spanning forty years. He has won a string of national awards and been described as a 'national treasure'. He owned a dairy farm for ten years and has homes in Greece and London.
Christopher Humphrys is John Humphrys' eldest son. He has lived in Greece for the past sixteen years and is a cellist with the hugely popular Camerata Orchestra based in Athens.

GOR001847586
9780340978849
0340978848
Blue Skies & Black Olives: A survivor's tale of housebuilding and peacock chasing in Greece by John Humphrys
John Humphrys
Used - Very Good
Paperback
Hodder & Stoughton General Division
2010-04-01
288
N/A
Book picture is for illustrative purposes only, actual binding, cover or edition may vary.
This is a used book - there is no escaping the fact it has been read by someone else and it will show signs of wear and previous use. Overall we expect it to be in very good condition, but if you are not entirely satisfied please get in touch with us
Trustpilot