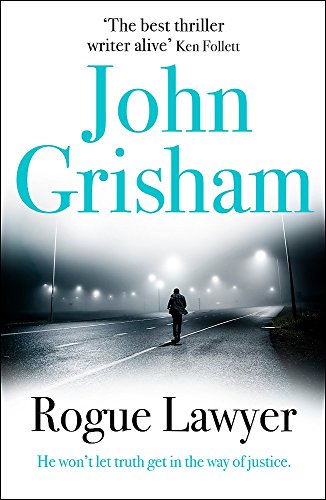 Worldwide bestseller John Grisham goes rogue with his most suspenseful thriller yet . . .

I'm not a typical lawyer. I don't maintain a pretty office filled with mahogany and leather. I don't belong to a big firm, prestigious or otherwise. I don't do good works through the bar association. I'm a lone gunman, a rogue who fights bad systems and hates injustice . . .

Sebastian Rudd takes the cases no one else wants to take: the drug-addled punk accused of murdering two little girls; a crime lord on death row; a homeowner who shot at a SWAT team.

Rudd believes that every person accused of a crime is entitled to a fair trial - even if he has to cheat to get one. He antagonises people from both sides of the law: his last office was firebombed, either by drug dealers or cops. He doesn't know or care which.

But things are about to get even more complicated for Sebastian. Arch Swanger is the prime suspect in the abduction and presumed murder of 21-year-old Jiliana Kemp, the daughter of the assistant chief of police. When Swanger asks Sebastian to represent him, he lets Sebastian in on a terrible secret . . . one that will threaten everything Sebastian holds dear.

Gritty, witty, and impossible to put down, Rogue Lawyer is the master of the legal thriller at his very best.

John Grisham has perfected the art of cooking up convincing, fast-paced thrillers * Telegraph *
Leaves one eager for more * Spectator *
No one does it better than Grisham * Daily Telegraph *
A master storyteller * Huffington Post *
A riveting read . . . A very satisfying ending * Gloria Hunniford, Mail on Sunday *
Terrific . . . The biggest mystery that ROGUE LAWYER poses is how Grisham, at this stage in his long writing career, can still devise all these distinctive characters, tricky legal predicaments and roguishly cheating ways to worm out of them. It's one mystery we Grisham fans just want to appreciate, rather than solve. * Washington Post *
Sebastian Rudd is a kind of social justice warrior and Grisham uses him to take jabs at the legal system . . . all with a blunt, rude, gravelly poetic wise guy voice that makes Rudd come across as a kind of 21st-century Philip Marlowe. * Benjamin Percy, The New York Times Book Review *
Highly readable, thanks to Grisham's fast-moving narrative skills * Independent *
The energy is sustained to the end * Sunday Times *

John Grisham as a child dreamed of being a professional baseball player. After graduating from law school at Ole Miss in 1981, he went on to practice law for nearly a decade, specialising in criminal defense and personal injury litigation. One day, Grisham overheard the harrowing testimony of a twelve-year-old rape victim and was inspired to start a novel exploring what would have happened if the girl's father had murdered her assailants. Getting up at 5 a.m. every day to get in several hours of writing time before heading off to work, Grisham spent three years on A Time to Kill and finished it in 1987.

His next novel, The Firm, spent 47 weeks on the New York Times bestseller list and became the bestselling novel of 1991. Since then, he has written one novel a year, including The Client, The Pelican Brief, The Rainmaker and The Runaway Jury.

Today, Grisham has written a collection of stories, a work of non-fiction, three sports novels, five kids' books, and many legal thrillers. His work has been translated into 42 languages. He lives near Charlottesville, Virginia.

GOR007043578
9781473622869
1473622867
Rogue Lawyer by John Grisham
John Grisham
Used - Very Good
Hardback
Hodder & Stoughton General Division
2015-10-20
352
N/A
Book picture is for illustrative purposes only, actual binding, cover or edition may vary.
This is a used book - there is no escaping the fact it has been read by someone else and it will show signs of wear and previous use. Overall we expect it to be in very good condition, but if you are not entirely satisfied please get in touch with us
Trustpilot