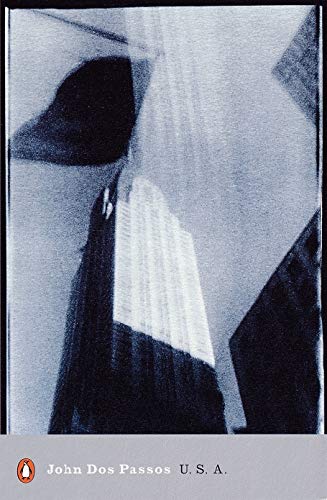 Through the testimony of numerous characters, both fictional and historical figures, the author builds up a composite picture of American society in the first quarter of the 20th century.

The Penguin Modern Classics edition of John Dos Passos' U.S.A. is a groundbreaking work of experimental fiction which, with its unique melange of fact and fiction, creates a compelling, tragic vision of America at the dawn of the twentieth century.

In this experimental trilogy, Dos Passos uses 'camera eye' and 'newsreel' sections to create a fragmented atmosphere. Through the testimony of numerous characters, both fictional and historical figures, he builds up a composite picture of American society in the first quarter of the 20th century. Richly detailed and throbbing with vitality, U.S.A. vividly evokes that uncertain period when America, so full of ideas and potential, was slowly and painfully abandoning the great American Dream.

John Dos Passos (1896-1970) was born in Chicago, the son of an eminent lawyer. After graduating from Harvard he served in the US Army Medical Corps during the First World War, and dabbled in journalism before embarking on life as a writer. In 1925 he published Manhattan Transfer, his first experimental novel in what was to become his peculiar style - a mixture of fact and fiction. His began a series of panoramic epics of American life with the U.S.A. trilogy, using the same technique and tracing, through interwoven biographies, the story of America from the early twentieth century to the onset of the Great Depression in 1929.

The biggest influence was a novel my father gave me to read at the age of about 13, U.S.A. by John Dos Passos. At that age, it just got me. You can trace back everything I do to that novel because it's all about the relationship between grand history and individual experience. And it's a collage with quotes from newsreels, cinema, and newspapers-a collage of history. That's where I get it all from. -- Adam Curtis (filmmaker)
GOR006473170
9780141185811
0141185813
U.S.a. by John Dos Passos
John Dos Passos
Penguin Modern Classics
Used - Like New
Paperback
Penguin Books Ltd
2001-08-30
1184
N/A
Book picture is for illustrative purposes only, actual binding, cover or edition may vary.
The book has been read, but looks new. The book cover has no visible wear, and the dust jacket is included if applicable. No missing or damaged pages, no tears, possible very minimal creasing, no underlining or highlighting of text, and no writing in the margins
Trustpilot