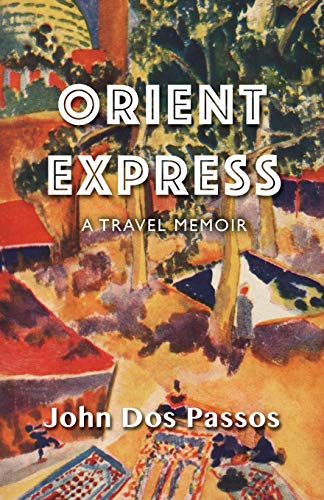 Before John Dos Passos enjoys fame as a chronicler and critic of American society, he wins recognition for command of aesthetics. Orient Express, a memoir of the author's travels through Eastern Europe, the Near East, and the Middle East, focuses on sights, sounds, and smells rather than plot or character. Dos Passos applies his instincts as a painter to mountain ranges and grimy alleyways, finding beauty everywhere.

His tour extends from Tiflis, Georgia, to Erivan, Armenia, and Marrakesh, Morocco; from Kasvin, Iran, to Baghdad, Iraq, and Damascus, Syria. He crosses the Syrian Desert, observes the aftermath of the Greek-Turkish War, climbs the Caucasus, explores Persia during the rise of Reza Kahn, and records the creation of Iraq by the British. His message is clear and relevant to contemporary travelers: holiness and happiness abounds in the East as much as the West.

With the name of Allah for all baggage, Dos Passos writes, you could travel from the Great Wall of China to the Niger and be fairly sure of food, and often of money, if only you were ready to touch your forehead in the dust five times a day and put away self and the glamorous West. And yet, he adds, the West is conquering.

John Roderigo Dos Passos (1896-1970) was a writer, painter, and political activist. He wrote over forty books, including plays, poetry, novels, biographies, histories, and memoirs. He crafted over four hundred drawings, watercolors, and other artworks.

Dos Passos considered himself foremost a writer of contemporary chronicles. He preferred the moniker of chronicler because he was happiest working at the edge of fiction and nonfiction.

Both genres benefited from his mastery of observation-his camera eye-and his sense of historical context. Dos Passos sought to ground fiction in historic detail and working-class, realistic dialogue. He invented a multimedia format of songs, newsreels, biographies, third-person fictional narrative, and first-person semi-autobiographical narrative snapshots to convey the frenzy of America's industrialism and urbanism in the twentieth century. His most memorable fiction-Three Soldiers (1921), Manhattan Transfer (1925), and the U.S.A. trilogy (1938)-possesses the authority of history and the allure of myth. Likewise, he sought to vitalize nonfiction history and reportage with the colors, sounds, and smells documented on his journeys across the globe.
NLS9781504011488
9781504011488
1504011481
Orient Express: A Travel Memoir by John Dos Passos
John Dos Passos
New
Paperback
Open Road Media
20150730
156
N/A
Book picture is for illustrative purposes only, actual binding, cover or edition may vary.
This is a new book - be the first to read this copy. With untouched pages and a perfect binding, your brand new copy is ready to be opened for the first time
Trustpilot