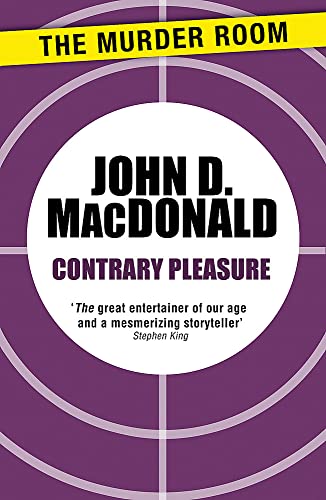 For years the Delevan family image reflected only the best of everything - wealth, position, influence, and the kind of expensive good looks that take generations to cultivate.

No one dared suspect that their glittering facade, their cherished privacy masked hidden lusts, furtive pleasures and twisted dreams that would soon erupt into a pattern of strange violence that threatened to destroy them all.

John D. MacDonald was born in Pennsylvania and married Dorothy Prentiss in 1937, graduating from Syracuse University the following year and receiving an MBA from Harvard in 1939. It was Dorothy who was responsible for the publication of his first work, when she submitted a short story that he had sent home while on military service. It was initially rejected by Esquire but went on to be published by Story magazine - and so began MacDonald's writing career. One of the best-loved and most successful of all the masters of hard-boiled crime and suspense, John D. Macdonald was producing brilliant fiction long after many of his contemporaries had been forgotten, and is still highly regarded today. The Executioners, possibly the best known of his non-series novels, was filmed as Cape Fear in 1962 and 1991, but many of the crime thrillers he produced between 1953 and 1964 are considered masterpieces, and he drew praise from such literary greats as Kurt Vonnegut and Stephen King, who declared him to be 'the great entertainer of our age, and a mesmerizing storyteller'. His novels are often set in his adopted home of Florida, including those featuring his famous series character Travis McGee, which appeared between 1964 and 1985. He served as president of the Mystery Writers of America and in 1972 was elected a Grand Master, an honour granted only to the greatest crime writers of their generation, including Ross MacDonald, John Le Carre and P. D. James. He won many awards throughout his long career, and was the only mystery writer ever to win the National Book Award, for The Green Ripper.