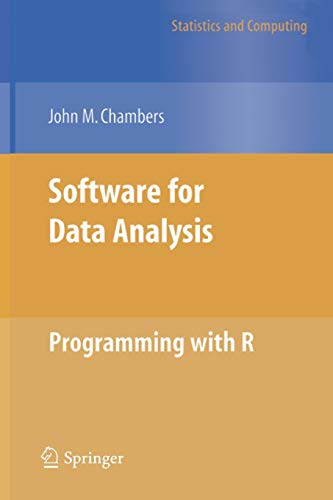 John Chambers turns his attention to R, the enormously successful open-source system based on the S language. This is the only advanced programming book on R, written by the author of the S language from which R evolved.

Software for Data Analysis: Programming with R by John Chambers

John Chambers turns his attention to R, the enormously successful open-source system based on the S language. His book guides the reader through programming with R, beginning with simple interactive use and progressing by gradual stages, starting with simple functions. More advanced programming techniques can be added as needed, allowing users to grow into software contributors, benefiting their careers and the community. R packages provide a powerful mechanism for contributions to be organized and communicated. This is the only advanced programming book on R, written by the author of the S language from which R evolved.

"R is nowadays the language used in programming for statistics. Most of the thesis and practical programming are implemented in this language. This is a valuable book for every body involved in data analysis, not only statisticians. Being written by the father of S programming language, as R is S based, the development of the presentation as well as the advises are good for fitting the minds of the students within the roots of the art of programming with R." (J. Scheneweiss, Revista Investigacion Operacional, Vol. 30 (2), 2009)

"...Written by one of the developers of R's predecessor, S, the book's aim...is to take the reader 'from user to programmer to contributor' in R. ...It is written in plain, clear English. The necessary terminology that is specific to R is defined over the course of the book and is easy to locate should a reader not start from the beginning. The author has attempted to keep chapters somewhat independent so that not starting from the beginning is an option for more advanced R users who are in need of a reference rather than a tutorial. There are two special indexes, separate from the main index, covering 'R Functions and Documentation' and 'R Classes and Types.'...I would expect that this book will find a home on a great many bookshelves. ..." (Biometrics 65, 1313, December 2009)

"...This is a book that will appeal to readers of diverse backgrounds. For R users it has a wealth of information on learning to use R effectively; from efficient and reliable programming to writing packages. It is an authoritative reference for programmers and developers. It is the type of book that will be referenced often, as the reader's experience with R, level of expertise and interest in programming grows." ( The American Statistician, August 2009, Vol. 63, No. 3)

"This text is about using computer software, in particular R, for obtaining information from the data ... . 'is aimed at those who need to select, modify, and create software to explore data, in other words, to program.' ... The book is aimed at (i) data analysts, namely anyone involved in exploring data, from data arising in scientific research to, say, data collected by the tax office; (ii) researchers in, and teachers of, statistical techniques and theory; (iii) those primarily interested in software and programming." (Susan R. Wilson, Zentralblatt MATH, Vol. 1180, 2010)

"This book is for software developers and advanced R users who want to become export R users: developing packages and new classes, and working with methods and generic functions. ... This book guides the reader through programming with R, beginning with simple interactive use and progressing by gradual steps, starting with simple functions. More advanced programming techniques can be added as needed.... Software developers and advanced R users should find that this book is full of wisdom ... ." (David J. Olive, Technometrics, Vol. 52 (2), May, 2010)

Introduction: Principles and Concepts.- Using R.- Programming with R: The Basics.- R Packages.- Objects.- Basic Data and Computations.- Data Visualization and Graphics.- Computing with Text.- New Classes.- Methods and Generic Functions.- Interfaces I: Using C and Fortran.- Interfaces II: Between R and Other Systems.- How R Works.- Errata and Notes for "Software for Data Analysis: Programming with R".
NLS9781441926128
9781441926128
1441926127
Software for Data Analysis: Programming with R by John Chambers
John Chambers
Statistics and Computing
New
Paperback
Springer-Verlag New York Inc.
2010-11-23
500
N/A
Book picture is for illustrative purposes only, actual binding, cover or edition may vary.
This is a new book - be the first to read this copy. With untouched pages and a perfect binding, your brand new copy is ready to be opened for the first time
Trustpilot