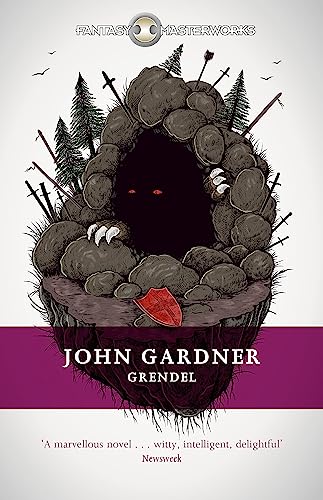 A brilliantly-executed retelling of BEOWULF from the point of view of the monster, Grendel, with a new introduction by Adam Roberts.

When Grendel is drawn up from the caves under the mere, where he lives with his bloated, inarticulate hag of a mother, into the fresh night air, it is to lay waste Hrothgar's meadhall and heap destruction on the humans he finds there. What else can he do? For he is not like the men who busy themselves with God and love and beauty. He sees the infuriating human rage for order and recognises the meaninglessness of his own existence.

GRENDEL is John Gardner's masterpiece; it vividly reinvents the world of Beowulf. In Grendel himself, a creature of grotesque comedy, pain and disillusioned intelligence, Gardner has created the most unforgettable monster in fantasy.

Few writers ever reach this level of greatness, It doesn't matter whether you think Grendel's about Anglo-Saxon warriors battling monsters or the collapse of superstition and the rise of capitalism, or both at once, this is mythic writing in every sense of those words. - SFXThis is a marvellous novel, absolutely marvellous: witty, intelligent, delightful, so totally a work of the imagination that it creates its own world while touching upon our memories of myth and verse, a celebration of what we most need in one of the greatest poetic myths we have. - NewsweekNo point in beating around the bush: John Gardner's third novel, GRENDEL, is an extraordinary achievement - New York Times

John Gardner (1933 - 1982)
Champlin Gardner Jr
John Champlin Gardner Jr was an American academic, a scholar of mediaeval literature, and writer who incorporated fantasy elements in many of his stories and novels, most notably in GRENDEL, JASON AND MEDEA, FREDDY'S BOOK and IN THE SUICIDE MOUNTAINS. Gardner was eclectic and prolific; he also wrote children's books, libretti, academic and non-fiction and plays.