Dreadnought Gunnery and the Battle of Jutland John Brooks 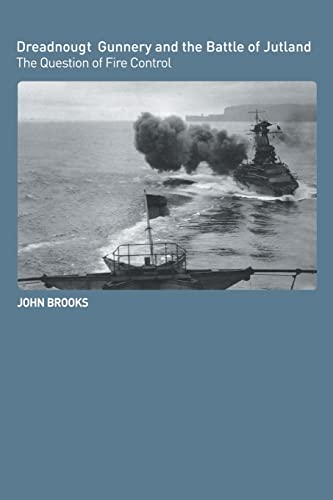 Dreadnought Gunnery and the Battle of Jutland by John Brooks

Reviews the studies of fire control, and describes the essentials of naval gunnery in the dreadnought era. This book provides accounts of the Dreyer/Pollen controversy, and of gunnery at Jutland. It outlines the German fire control system, and offers an assessment of Beatty's tactics throughout the Battle of Jutland.

Dreadnought Gunnery and the Battle of Jutland: The Question of Fire Control by John Brooks

This new book reviews critically recent studies of fire control, and describes the essentials of naval gunnery in the dreadnought era.

With a foreword by Professor Andrew Lambert, it shows how, in 1913, the Admiralty rejected Arthur Pollen's Argo system for the Dreyer fire control tables. Many naval historians now believe that, consequently, British dreadnoughts were fitted with a system that, despite being partly plagiarised from Pollen's, was inferior: and that the Dreyer Tables were a contributory cause in the sinking of Indefatigable and Queen Mary at Jutland.

This book provides new and revisionist accounts of the Dreyer/Pollen controversy, and of gunnery at Jutland. In fire control, as with other technologies, the Royal Navy had been open, though not uncritically, to innovations. The Dreyer Tables were better suited to action conditions (particularly those at Jutland). Beatty's losses were the result mainly of deficient tactics and training: and his battlecruisers would have been even more disadvantaged had they been equipped by Argo. It follows the development of the Pollen and Dreyer systems, refutes the charges of plagiarism and explains Argo's rejection. It outlines the German fire control system: and uses contemporary sources in a critical reassessment of Beatty's tactics throughout the Battle of Jutland.

'For anyone seriously interested in that period of naval history, this book is indispensible.'

'In a clear, dispassionate and compelling manner, Brooks gives us an excellent account of dreadnought gunnery at Jutland and of its previous technical evolution.'

1. Old Controversies, New Histories 2. Long Range Naval Gunnery 3. Progress in Gunnery 4. A.C. and Argo
The Dreyer Tables 5. Influences and Choices 6. Into Battle 7. Jutland and After 8. An Exceptional Case
NLS9780415407885
9780415407885
0415407885
Dreadnought Gunnery and the Battle of Jutland: The Question of Fire Control by John Brooks
John Brooks
Cass Series: Naval Policy and History
New
Paperback
Taylor & Francis Ltd
2006-04-06
336
N/A
Book picture is for illustrative purposes only, actual binding, cover or edition may vary.
This is a new book - be the first to read this copy. With untouched pages and a perfect binding, your brand new copy is ready to be opened for the first time
Trustpilot