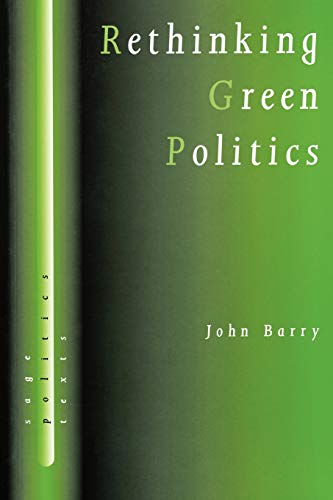 Focuses on topics in 'green' political theory and educates those anxious to be good citizens and challenges those responsible for public policy! This analysis of ecological morality, individual stewardship, and collective responsibility provides an original and seminal treatise that advances the discipline as a whole.

`Of the sixteen books submitted, some of high quality, this one was agreed to be in a class of its own.... The book breaks new ground in `green' political theory, and in an engaging manner, educates those anxious to be good citizens and challenges those responsible for public policy, in a highly topical and globally important discourse.... Barry's immanent critique, his insistence that we build on what there is, his resistance to the easy anti-statist line, his sane and balanced outlook, is intellectually brave in this often rather clamant territory. The analysis of ecological morality, individual stewardship, and collective responsibility provides an original and seminal treatise that advances the discipline as a whole' - Professor Andrew Dunsire

`Rethinking Green Politics is refreshingly original in its willingness to move away from the stereotyped classifications of green political ideology. It seeks a political theory in which the virtues of citizenship - openness to argument, caution in the use of resources and public spiritness - are invoked to play their part in the task of reconciling humans to nature. Clarity and moderation are all too often in short suppy on these topics, but this book has both' - Albert Weale, University of Essex

`John Barry has cut the Gordian knot of the increasingly sterile debate between anthropocentrists and ecocentrists, and done us the great favour of putting the idea of ecological virtue on the political agenda. This is the kind of book that sets an agenda, and others will follow it' - Andrew Dobson, author of Green Political Thought

`Rethinking Green Politics opens up a debate which had been all but closed down. John Barry successfully challenges attempts to force green thought into narrow ideological boxes, and presents compelling arguments for a new view of green political theory. This book could scarcely have been more timely, or more necessary' - George Monbiot, Guardian columnist, author of No Man's Land

`John Barry argues powerfully for a realistic yet visionary green politics. Rather than contemplate distant utopias, Barry believes greens should build on the best we have in the way of culture, economics, and democracy. The result is a comprehensive, refreshing and sophisticated treatment of green thinking' - John Dryzek, University of Melbourne

`John Barry's perceptive and impressive scholarship clears the political and ideological ground for a mature green political theory. Through a comprehensive critique of green perspectives he develops a critical synthesis of green ideas as the basis of his own theoretical framework. His clearly written and sustained argument makes the case for ecological enlightenment, a unity of ecological virtue and human progress. Barry shares the green critique of `arrogant humanism' but

looks for a 'concrete utopia' based on human understanding and respect for the nonhuman world. He provides careful arguments for a democratic, realistic and enlightened approach to collective ecological management' - Mary Mellor, University of Northumbria at Newcastle, and author of Feminism and Ecology

`Environmental activists and theorists have been waiting for this book for a long time. Barry addresses not only questions of environmental ethics but also the highly important questions of the relations between environmental protection on the one hand and democracy and political egalitarianism on the other' - Avner de Shalit, Hebrew University of Jerusalem

`The true mark of a good author is that he seduces and convinces at the same time, that he takes his readers on a long and perilous journey without ever boring or exhausting anyone, and that he brings them to a safe and comfortable destination. Barry does all this and more. The solutions he offers are a remarkably modern conception of individual virtue and stewardship, a liberal democracy gone deliberative , and a place under the sun for serious green political theory. Rethinking Green Politics relates a fascinating quest described with verve, modesty, care and love. It is more than just essential reading' - Marcel Wissenburg, University of Nijmegen

`Rethinking Green Politics deals with crucial questions about progress, about democracy and citizenship, about the roles of the state, the market and civil society, and about political theory itself. John Barry's analysis of these questions, and of green moral theory and ecological virtue, will be valued by thoughtful practitioners as well as by students of politics. I hope this important book will be widely read and discussed' - James Robertson, author of Beyond The Dependency Culture and Transforming Economic Life

`Barry's account of green moral theory and ecological virtue raises crucial questions about progress, about democracy and citizenship, about the roles of the state, the market, and civil society, and about political theory itself. We recommend it.' - Turning Point