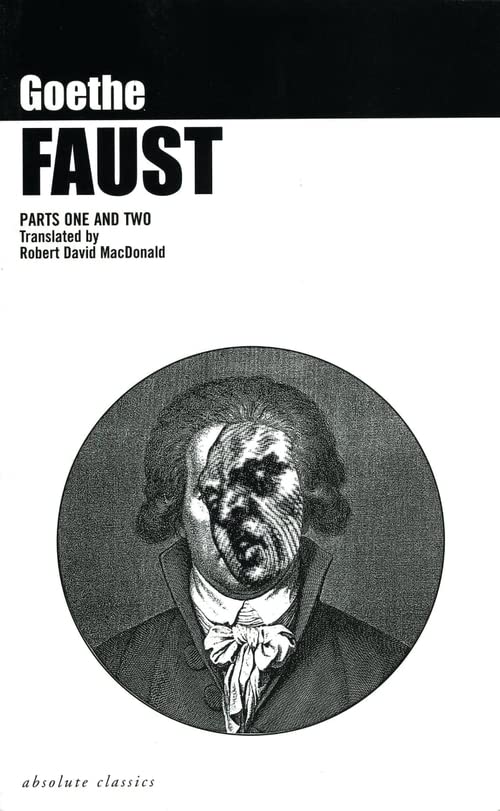 Faust: Parts One and Two by Johann Wolfgang von Goethe

The power and magic of the Faust story, the man who, in a pact with the Devil, trades his soul in return for a period of total knowledge and absolute power, is one of the most potent of all European myths.

Faust: Parts One and Two by Johann Wolfgang von Goethe

The power and magic of the Faust story, the man who, in a pact with the Devil, trades his soul in return for a period of total knowledge and absolute power, is one of the most potent of all European myths. Johann Wolfgang von Goethe (1749-1832) worked on this poetic drama in bursts from his twenties until the end of his life. He reshaped the perpetually fascinating legend, probing the nature and process of human striving and questioning the assumed divisins between the forces of good and evil. His Faust has become a landmark in world literature.

Robert David MacDonald's translation of Faust, used in acclaimed productions in Scotland (Glasgow Citizens') and England (Lyric Hammersmith), offers access to the play in the English language for readers and playgoers alike and opens up the extraordinary range and pace of Goethe's language, rhythms, imagery and ideas, without sacrificing any of the play's humour. The Open University has adopted the translation as a set book for the course entitled 'From Enlightenment to Romanticism'.

Robert David MacDonald (1929-2004) was born in Elgin, Scotland. After originally training as a musician, he worked as a Director, Playwright and Translator. As an Assistant Director, he worked at both the Glyndebourne Opera Festival and for the Royal Opera House. In 1971, he became Co-Artistic Director of the Glasgow Citizens Theatre, where he directed fifty plays and wrote fifteen for the venue before his retirement in 2003. The plays that he wrote for the Glasgow Citz include The De Sade Show (1975), Chinchilla (1977), Summit Conference (1978), also seen in the West End with Glenda Jackson and Gary Oldman, A Waste of Time (1980), Don Juan (1980), Webster (1983), Britannicus (2002) and Cheri (2003). As a translator, MacDonald translated over seventy different plays and opera from over ten different languages including The Threepenny Opera, Tamerlano, Die Entfuhrung aus dem Serail, The Marriage of Figaro, Orpheus and The Human Voice, Conversation at Night, Shadow of Angels, The Balcony, The Government Inspector, Tasso, Faust I and II, Ibsen's Brand and Hedda Gabler, Lermontov's Maskerade, Lorca's The House of Bernarda Alba, Moliere's School for Wives and Don Juan, Pirandello's Enrico Four, Racine's Phedre, Schiller's Mary Stuart, The Maid of Orleans and Don Carlos, Chekhov's The Seagull, Verne's Around the World In Eighty Days, Wedekind's Lulu and Goethe's Clavigo. His adaptation of War and Peace ran for two seasons on Broadway and received an Emmy award when shown on U.S television. The Finborough Theatre has previously presented Robert David MacDonald's versions of Rolf Hochhuth's Soldiers (2004) and The Representative (2006)
GOR007951622
9781870259118
1870259114
Faust: Parts One and Two by Johann Wolfgang von Goethe
Johann Wolfgang von Goethe
Oberon Classics
Used - Like New
Paperback
Bloomsbury Publishing PLC
19880401
232
N/A
Book picture is for illustrative purposes only, actual binding, cover or edition may vary.
The book has been read, but looks new. The book cover has no visible wear, and the dust jacket is included if applicable. No missing or damaged pages, no tears, possible very minimal creasing, no underlining or highlighting of text, and no writing in the margins
Trustpilot