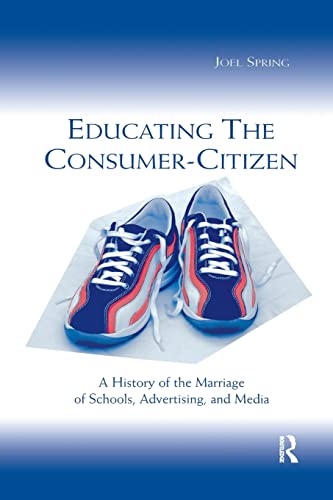 Educating the Consumer-citizen by Joel Spring

This text charts the rise of consumerism as the dominant American ideology of the 21st century. It documents and analyses how, from the early 19th century through to the present, the combined endeavours of schools, advertising and media have led to the creation of a consumerist ideology.

Educating the Consumer-citizen: A History of the Marriage of Schools, Advertising, and Media by Joel Spring

In Educating the Consumer-Citizen: A History of the Marriage of Schools, Advertising, and Media, Joel Spring charts the rise of consumerism as the dominant American ideology of the 21st century. He documents and analyzes how, from the early 19th century through the present, the combined endeavors of schools, advertising, and media have led to the creation of a consumerist ideology and ensured its central place in American life and global culture.

Spring first defines consumerist ideology and consumer-citizen and explores their 19th-century origins in schools, children's literature, the commercialization of American cities, advertising, newspapers, and the development of department stores. He then traces the rise of consumerist ideology in the 20th century by looking closely at: the impact of the home economics profession on the education of women as consumers and the development of an American cuisine based on packaged and processed foods; the influence of advertising images of sports heroes, cowboys, and the clean-shaven businessman in shaping male identity; the outcomes of the growth of the high school as a mass institution on the development of teenage consumer markets; the consequences of commercial radio and television joining with the schools to educate a consumer-oriented population so that, by the 1950s, consumerist images were tied to the Cold War and presented as the "American way of life" in both media and schools; the effects of the civil rights movement on integrating previously excluded groups into the consumer society; the changes the women's movement demanded in textbooks, school curricula, media, and advertising that led to a new image of women in the consumer market; and the ascent of fast food education. Spring carries the story into the 21st century by examining the evolving marriage of schools, advertising, and media and its ongoing role in educating the consumer-citizen and creating an integrated consumer market.

This book will be of wide interest to scholars, professionals, and students across foundations of education, history and sociology of education, educational policy, mass communications, American history, and cultural studies. It is highly appropriate as a text for courses in these areas.
Contents: Preface. Horace Mann Meets the Wizard of Oz. Liberation With Jell-O and Wonder Bread: Educating the New Woman. Cowboys and Jocks: Visions of Manliness. Comodification of Leisure and Cultural Control: Schools, Movies, and Radio. The American Way and the Manufacturing of Consent. Participating in the American Dream. Sonya's Choice: Fast-Food Education.
NLS9780805842746
9780805842746
0805842748
Educating the Consumer-citizen: A History of the Marriage of Schools, Advertising, and Media by Joel Spring
Joel Spring
Sociocultural, Political, and Historical Studies in Education
New
Paperback
Taylor & Francis Inc
2003-05-13
267
N/A
Book picture is for illustrative purposes only, actual binding, cover or edition may vary.
This is a new book - be the first to read this copy. With untouched pages and a perfect binding, your brand new copy is ready to be opened for the first time
Trustpilot