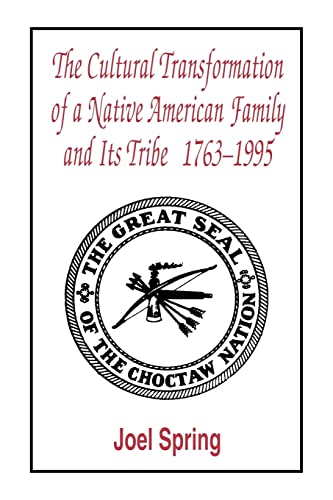 A description of the impact of US government civilization and education policies on a Native American tribe from 1793 to 1995. The author dicovers a direct relationship between educational policies and their impact on his family and tribe through the process of civilization.

The Cultural Transformation of A Native American Family and Its Tribe 1763-1995: A Basket of Apples by Joel Spring

This book describes the impact of U.S. government civilization and education policies on a Native American family and its tribe from 1763 to 1995. While engaged in a personal quest for his family's roots in Choctaw tribal history, the author discovered a direct relationship between educational policies and their impact on his family and tribe. Combining personal narrative with traditional historical methodology, the author details how federal education policies concentrated power in a tribal elite that controlled its own school system in which students were segregated by social class and race.

The book begins with the cultural differences that existed between Native Americans and European colonists. The civilization policies discussed begin in the 1790s when both Presidents George Washington and Thomas Jefferson searched for a means of gaining the lands occupied by the southern tribes, including the Choctaws. The story involves a complicated interaction between government policies, the agenda of white educators, and the desires of Native Americans. In a broader context, it is a study of the evolution of an American family from the extended support of the community and clan of the past, to the present world of single parents adrift without community or family safety nets.

"Begun as a personal quest to recover his Native American roots, Joel Spring's project evolved into an interesting and valuable book that describes the intertwining of his own mixed-blood Choctaw ancestors and over one hundred years of history of that tribe's dealings with the U.S. government...the book weaves a complicated web of interrelationships between the agendas of federal and state governments, Protestant missionaries, and white educators, and the desires of Native Americans."
-Teachers College Record

"...a welcome and highly readable contribution to scholarship in the fields of history, anthropology, education, and American Indian studies. Morevoer, the book promises to be a significant contribution to the tribes whose histories Spring chronicles."
-Anthropology and Education Quarterly

Contents: Preface. Part I: Choctaws, Cherokees, and a Mixed-Blood Family Prior to Removal. A Basket of Apples. Indian Policy as Ideological Management. The Ghost Dance, Schools, and Social Classes. The Missionaries and Their Schools. Removal, Betrayal, and Death. Part II: A Choctaw Family and Its Tribe After Removal. The Choctaw Republic and Its People. Academies, Christian Families, and Anglo-Saxon Culture. "I am a slave instead of the Negroes": Segregation and Language. From Thomas Jefferson to Henry Ford: The End of the Choctaw Republic. Afterword: The Role of Schooling in Modern Society.
NLS9780805822472
9780805822472
080582247X
The Cultural Transformation of A Native American Family and Its Tribe 1763-1995: A Basket of Apples by Joel Spring
Joel Spring
Sociocultural, Political, and Historical Studies in Education
New
Paperback
Taylor & Francis Inc
1996-07-13
220
N/A
Book picture is for illustrative purposes only, actual binding, cover or edition may vary.
This is a new book - be the first to read this copy. With untouched pages and a perfect binding, your brand new copy is ready to be opened for the first time
Trustpilot