The American School Joel Spring (Queens College and the Graduate Center of the City University of New York, USA) 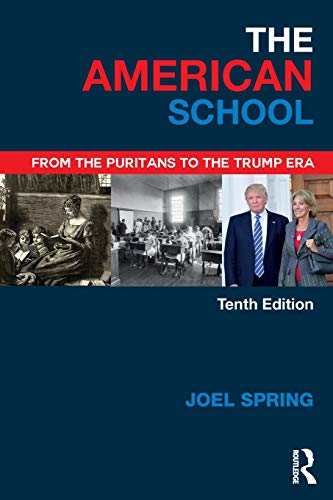 The American School by Joel Spring (Queens College and the Graduate Center of the City University of New York, USA)

The American School: From the Puritans to the Trump Era by Joel Spring (Queens College and the Graduate Center of the City University of New York, USA)

This current, comprehensive history of American education is designed to stimulate critical analysis and critical thinking by offering alternative interpretations of each historical period. In his signature straight-forward, concise style, Joel Spring provides a variety of interpretations of American schooling, from conservative to leftist, in order to spark the reader's own critical thinking about history and schools. This tenth edition follows the history of American education from the seventeenth century to the integration into global capitalism of the twenty-first century to the tumultuous current political landscape. In particular, the updates focus on tracing the direct religious links between the colonial Puritans and the current-day Trump administration.

'Joel Spring's The American School points up the fact that, historically, schools have been used as means to gain ideological control over perspective and as means to empower and liberate, both wrapped in democratic shibboleths of "freedom," "equality," and "justice." Furthermore, Spring gives body to the idea that public schooling in the United States is an inherently political undertaking shaped by the various struggles over what democratic justice should mean and how this meaning should be cultivated in the characters who will be entrusted with its realization and direction.'

-Randy Hewitt, Associate Professor of Philosophy of Education at the University of Central Florida.

Interpreting School History: From the Right to the Left

Religious Debates in U.S. Schools from the Colonial Era to the Present

Schools and the Culture Wars

Schools as Managers of Public Thought

Racial and Ethnic Conflict as a Theme in School History

2 Globalization and Religion in Colonial Education

Education and Culture in Colonial Society

The Role of Education in Colonial Society

The Idea of Secular Education: Freedom of Thought and the Establishment of Academies

The Family and the Child

3 Nationalism, Multiculturalism, and Moral Reform in the New Republic

The Problem of Cultural Diversity

Noah Webster: Nationalism and the Creation of a Dominant Culture

Institutional Change and the American College

4 The Ideology and Politics of the Common School

The Ideology of the Common School Movement

Workingmen and the Struggle for a Republican Education

How Much Government Involvement in Schools? The Whigs and the Democrats

The Birth of the High School

The Continuing Debate about the Common School Ideal

5 The Common School and the Threat of Cultural Pluralism

The Increasing Multicultural Population of the United States

Irish Catholics: A Threat to Anglo-American Schools and Culture

Slavery and Freedom in the North: African Americans and Schools in the New Republic

The Evolution of Bureaucracy: A Global Model

McGuffey's Readers and the Spirit of Capitalism

7 Multiculturalism and the Failure of the Common School Ideal

Conclusion: Setting the Stage for the Great Civil Rights Movement

Immigration from Southern and Eastern Europe

The Second Crusade for Black Education

Adapting the Classroom to the Workplace: Lesson Plans

Adapting the Classroom to the Workplace: Progressivism

Adapting the Classroom to the Workplace: Stimulus-Response

Conclusion: The Meaning of Equality of Opportunity

Measurement, Democracy, and the Superiority of Anglo-Americans

Closing the Door to Immigrants: The 1924 Immigration Act

Eugenics and the Age of Sterilization

The University and Meritocracy

Teachers versus Administrators: The American Federation of Teachers

The Rise of the National Education Association

The Political Changes of the Depression Years

The Politics of Ideological Management: The American Legion

Textbook Censorship and the Teaching of Evolution

Selling the "American Way" in Schools and on Billboards

Propaganda and Free Speech in the Schools

12 Schools, Media, and Popular Culture: Influencing the Minds of Children and Teenagers

Censorship of Movies as a Form of Public Education

Educators and the Movies

The Production Code: Movies as Educators

Creating the Superhero for Children's Radio

Controlling the Influence of Comic Books

The Creation of Teenage Markets

Children and Youth from the 1950s to the Twenty-First Century

13 American Schools and Global Politics: The Cold War and Poverty

The Scholastic Aptitude Test (SAT) and the Educational Testing Service

The Cold War and Purging the Schools of Communists

Schools and the War on Poverty

The Immigration Act of 1965 and the New American Population

Multicultural Education and the Culture Wars

Schools and the International Women's Movement

The Coloring of Textbook Town

Free Markets and Human Capital: School Choice and the Role of Schools in Economic Growth and Ending Poverty

No Child Left Behind, Testing and School Prayer

No Child Left Behind And Religious Conservatives

The End of The Common School: Choice, Privatization, and Charter Schools

Educating for the Consumer Economy

Global Crisis and the Demise of Environmental Education