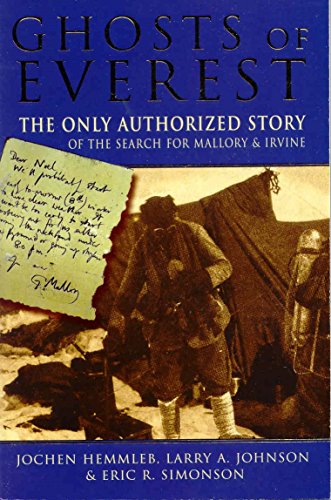 Ghosts of Everest by Jochen Hemmleb

Ghosts of Everest: The Only Authorized Story of the Se by Jochen Hemmleb

This is a detective story of the first order. It is the story not just of Mallory and Irvine's last climb, but of the team of climbers and researchers who, together, found the body of perhaps Britain's greatest mountaineer and uncovered the startling story he had waited so long to reveal. Written by the three key members of the team, and incorporating extensive interviews with other team members, GHOSTS OF EVEREST is the dramatic unfolding of both the 1999 and 1924 expeditions, woven together into a compelling narrative.

This book is the definitive account and has become an instant classic.

GOR001187288
9780330393799
0330393790
Ghosts of Everest: The Only Authorized Story of the Se by Jochen Hemmleb
Jochen Hemmleb
Used - Very Good
Paperback
Pan Macmillan
20001006
288
N/A
Book picture is for illustrative purposes only, actual binding, cover or edition may vary.
This is a used book - there is no escaping the fact it has been read by someone else and it will show signs of wear and previous use. Overall we expect it to be in very good condition, but if you are not entirely satisfied please get in touch with us
Trustpilot