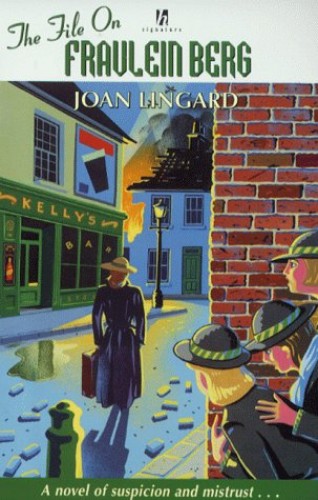 The File On Fraulein Berg by Joan Lingard

A powerful story of prejudice in wartime Ireland

The File On Fraulein Berg by Joan Lingard

1944 Belfast. Fraulein Berg arrives to teach German at Kate, Harriet and Sally's school. Saturated with war-time propaganda, reading spy stories and imagining themselves dropping over enemy lines to perform daring and heroic deeds, the girls decide that, as she's German, she must be the enemy - and she must be a spy. They set to work to prove it, following her everywhere, recording everything in notebooks, hounding her, seeing themselves as valiant secret service agents helping their country. Finally on a train travelling between Dublin and Belfast, they alert a border guard ... The story is told by Kate years later, always haunted by their silly antics at the time, and often wondering what happened, in the end, to the unhappy Fraulein Berg. In fact, she was a Jewish escapee from Nazi Germany, having lost parents, two sisters and a brother in the gaschambers. Kate reflects that, so used to dividing people up into Protestants and Catholics, enemies and friends, they had never stopped to think of the tragedy they might be creating..

The welcome re-issue of a novel set in Belfast during the Second World War. Although set in the past, the subject - the terrorising of someone simply on the basis of ignorant suspicion - is resoundingly contemporary. * The Scotsman, July 2000 *
powerful and disturbing * Shelf Life, issue 15, Winter 2000 *
Joan Lingard was born in Edinburgh but grew up in Belfast. She has had a long and varied career in children's books, and was awarded the M.B.E. In 1998 for services to children's literature. She writes with equal success for teenagers, adults and the very young.
GOR006293448
9780340764640
0340764643
The File On Fraulein Berg by Joan Lingard
Joan Lingard
Used - Very Good
Paperback
Hodder & Stoughton Childrens Division
2000-01-20
160
N/A
Book picture is for illustrative purposes only, actual binding, cover or edition may vary.
This is a used book - there is no escaping the fact it has been read by someone else and it will show signs of wear and previous use. Overall we expect it to be in very good condition, but if you are not entirely satisfied please get in touch with us
Trustpilot