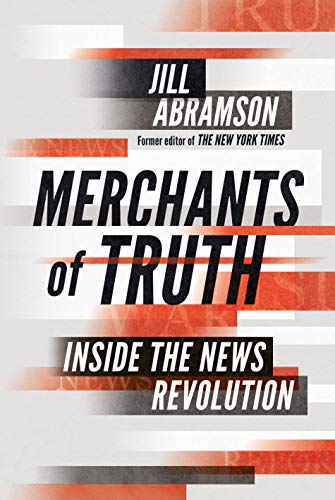 Merchants of Truth by Jill Abramson

Merchants of Truth: Inside the News Revolution by Jill Abramson

Merchants of Truth by Jill Abramson, former editor of The New York Times, is the gripping and definitive in-the-room account of the revolution that has swept the news industry over the last decade and reshaped our world.

'A cracking, essential read ... [Abramson] knows where most of the bodies are buried and is prepared to draw the reader a detailed map' Guardian

Drawing on revelatory access, Abramson takes us behind the scenes at four media titans during the most volatile years in news history. Two are maverick upstarts: BuzzFeed, the brain-child of virtuoso clickbait scientist Jonah Perretti, and VICE, led by the booze-fuelled anarcho-hipster Shane Smith. Their viral technology and disregard for the long-established standards of news journalism allow them to build game-changing billion-dollar businesses out of the millennial taste for puppies and nudity.

The two others are among the world's most venerable news institutions: The New York Times, owned and run for generations by the Sulzberger dynasty, and The Washington Post, also family-owned but soon to be bought by the world's richest merchant of all, Jeff Bezos. Here Abramson reveals first-hand the seismic clashes that take place in the boardrooms and newsrooms as they are forced to choose between their cherished principles - objectivity and impartiality - and survival in a world where online advertising via Facebook and Google seems the only life-raft.

We are with the deal-making tycoons, thrusting reporters and hard-bitten editors, the egomaniacs, bullshitters, provocateurs and bullies, as some surf and others drown in the breaking wave of change. And we watch as the survivors confront the horrifying cost of their success: sexual scandal, fake news, the election of President Trump, the shaking of democracy.

Exposing the people and decisions that brought us to now, Merchants of Truth is a major book that breaks the ultimate news story of our times.

A cracking, essential read ... [Abramson] knows where most of the bodies are buried and is prepared to draw the reader a detailed map * Guardian *
A masterwork ... a vastly useful immersion in the ways of contemporary journalism * Financial Times *
Chock-full of arresting titbits ... describes the perfect storm that has engulfed newspapers over the past dozen years * Telegraph *
Amazing. Filled with colourful inside stories, this book is essential for anyone who wants to understand today's media and how it is affecting our society -- WALTER ISAACSON
Deeply researched, wonderfully written and filled with fascinating portraits. Jill Abramson tells the truth about the news business as only she can tell it. An important book at a crucial time -- GAY TALESE
Jill Abramson was the executive editor of The New York Times, the first woman to hold its most senior editorial position, between 2011 and 2014. During her seventeen years at the paper she was also the first woman to serve as its managing editor and as its Washington bureau chief. Before joining the Times, she spent nine years at the Wall Street Journal. She is now a senior lecturer at Harvard University and writes a bi-weekly column for the Guardian about US politics. She lives in New York City.
GOR009714524
9781847923783
184792378X
Merchants of Truth: Inside the News Revolution by Jill Abramson
Jill Abramson
Used - Very Good
Hardback
Vintage Publishing
2019-02-07
544
N/A
Book picture is for illustrative purposes only, actual binding, cover or edition may vary.
This is a used book - there is no escaping the fact it has been read by someone else and it will show signs of wear and previous use. Overall we expect it to be in very good condition, but if you are not entirely satisfied please get in touch with us
Trustpilot