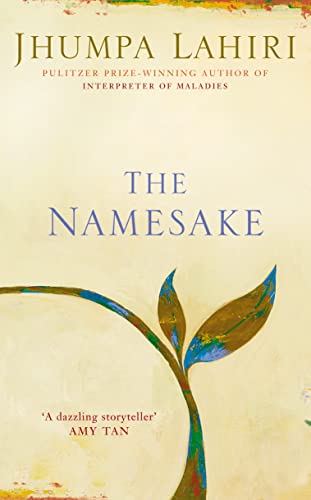 The Namesake by Jhumpa Lahiri

`The Namesake' is the story of a boy brought up Indian in America, from `the kind of writer who makes you want to grab the next person and say "Read this!".' Amy Tan

The Namesake by Jhumpa Lahiri

`The Namesake' is the story of a boy brought up Indian in America, from `the kind of writer who makes you want to grab the next person and say "Read this!".' Amy Tan

Gogol Ganguli is headed to paradise, a place of satisfaction and fulfilment. He doesn't really know it as he travels through his life toward this destination. He is only aware that he is not quite at ease with himself, and for a long time he thinks it's all because of his name...

His journey begins by train. But Gogol is not on it. Rather it was a train whose fateful journey gave his father, Ashoke Ganguli - a Bengali in America, awkward in his new surroundings - both a brush with mortality and the name of his firstborn son. Brought up as an Indian in suburban America, Gogol finds himself itching to cast off the inherited values and priorities that his parents drape over him. He escapes into Education and is educated above all in new ways of living, new ways of making a family, new ways of being married. He is shown a perfect home, then - to his delight and surprise - invited in to it, for good. But still he wears that Russian's name, still he is an Indian in America, and, once you get to the furthest point there, there's nowhere else to go but back.

In `The Namesake', Jhumpa Lahiri presents her reader with the entirely satisfying novel that those who loved the clarity, sympathy and grace of her prize-winning debut, the story collection `Interpreter of Maladies', longed for and anticipated. It is a triumph of humane story telling.

Praise for `Interpreter of Maladies':

`Lahiri is a writer of uncommon elegance and poise, and with "Interpreter of Maladies" she has made a precocious debut.' New York Times

`After reading three of these stories, I found myself rationing the remaining six, to try to make the book last longer. A lovely collection.' Scotsman

`The genius of Lahiri's storytelling lies in her restrained drollery, her eye for details, and her tone of wise consolation.' Harpers & Queen

Jhumpa Lahiri was born in London of Bengali parents, and grew up in Rhode Island, USA. Her stories have appeared in many American journals, including the New Yorker. Interpreter of Maladies, her first published collection, won the Pulitzer Prize 2000 for Fiction, the New Yorker Prize for Best First Book, the PEN/Hemingway Award and was shortlisted for the Los Angeles Times Award. Jhumpa Lahiri lives in Brooklyn.

GOR002744678
9780007173037
0007173032
The Namesake by Jhumpa Lahiri
Jhumpa Lahiri
Used - Very Good
Paperback
HarperCollins Publishers
2003-09-01
250
N/A
Book picture is for illustrative purposes only, actual binding, cover or edition may vary.
This is a used book - there is no escaping the fact it has been read by someone else and it will show signs of wear and previous use. Overall we expect it to be in very good condition, but if you are not entirely satisfied please get in touch with us
Trustpilot